Today we have author
Errol Barr
on our blog to answer a few questions about himself and his book,
Rise of Satan. 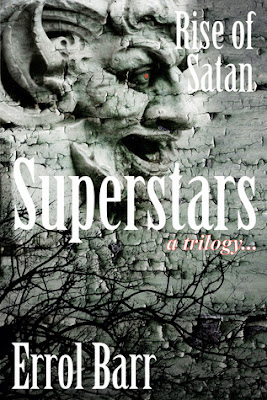 Rise of Satan opens in 400 AD, as courageous King Tiridates of Armenia and his seven sons, empowered by God, turn back Satan’s plan to stop the spread of Christianity. Ever since this epic defeat, Satan has been plotting his revenge. Now he is ready to unleash a diabolical plan to destroy man once and for all. He will spawn seven children from around the world who will grow into young musical geniuses and coalesce into a superstar rock band. Harnessing the hypnotic charisma of popular music and the power of modern media, Satan will make this supergroup so popular, so influential, that the youth of the world will fall under his spell – and soon everyone else. Satan is convinced faith and courage are powerless against him. But sometimes faith and courage are all it takes to turn everyday people into heroes.

Follow this link to add Rise of Satan to your Goodreads bookshelf!

Get your copy here!
Amazon


Thanks, Errol, for stopping by!  When and why did you begin writing? What inspired you?
I have always had an interest in writing my whole life. When I was about 24 years old (25 years ago, can't believe it) in a cramped little apartment with two little kids I setup an electronic typewriter in my closet, dropped a hanging light on a extension cord over the door and typed away while the kids slept. I have written some marketing articles along the way for trade publications that were published but I have always had a creative mind so the inspiration would have come from that.

How do you come up with the idea behind Rise of Satan?
The idea literally just popped into my head in 2007 while I was alone in a hotel room. I was so excited I jotted down all of my ideas that were flowing on hotel stationary. Took me a few years to position myself to actually write it.

What is your work schedule like when you're writing?
I will spend a few hours a day squeezing in some writing time but mostly in the evening. In Rise of Satan I kept my chapters at least 2,000 words so when I would sit down to write it would always be in the mindset to complete at least one chapter.

How has your environment/upbringing colored your writing?
I was raised in a middle class home that was uneventful and really no one particular thing I can point to that influenced me in my writing. Supportive parents, pain in the ass siblings (just kidding).

As a child, what did you want to be when you grew up?
I wanted to be a police officer. Doesn't all little boys? Well maybe a fireman.

What are you working on now?
I am completing Book Two of the Superstars Trilogy, Vasallus due this September. I am so excited!

Where do you hope to see yourself in the next five years?
I hope to see myself as a full time author, my royalties allow me to focus totally on writing. That would be so cool.

What book are you reading now?
I am reading Michael Connelly 'The Fifth Witness' on my Kobo. Big fan of Connelly. I am also into John Sandford and his Prey series. Great stuff.


About the Author:
Errol Barr lives in High River, Alberta, Canada and is busy completing work on book two of the Superstars trilogy, Vasallus.