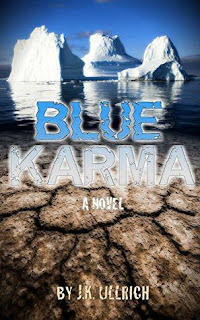 Water. It covers almost three-quarters of the planet, comprises more than half the human body, and has become the most coveted resource on Earth.

Amaya de los Santos survived the typhoon that left her an orphan. Now she scrapes by as an ice poacher, illegally harvesting fresh water for an always-thirsty market. But when she rescues an injured enemy soldier, she's pulled into a storm of events more dangerous than any iceberg. After years of relying only on herself, she must learn to trust another...or risk losing all that's left of her family.

Logan Arundson should be dead. After a mysterious attack destroys his military unit, he abandons his Arctic post for his native California, where droughts have made water a religion and a resource worth killing for. But when the water wars follow him home, he must face his frozen demons if he wants to save his town...and the girl he loves.

Paul Hayes is heir to an empire. But being vice president of a powerful hydrology company isn't all gardens and swimming pools: he deals with ice poachers, water rights, and the crushing expectations of his CEO mother. His investigation into company sabotage and the miraculous appearance of a lake in a small California town lead him to a shocking discovery...and an impossible decision.

Blue Karma is a story of choices and consequences, humanity and love.

J.K. Ullrich likes to joke that she began writing environmental fiction at age six, when she won the local library's Captain Planet essay contest. In the ensuing 20+ years, she earned a B.A. in English and pursued a successful career in analytical writing, although fiction remains her true passion. She published her first novel, Blue Karma, in 2015. When she's not reading or writing, you can find her running on a favorite trail, jamming with a local cover band, or yelling at her baseball team.

1. Tell us a little bit about your main characters.
Blue Karma follows three teenaged protagonists, but don’t expect the typical YA love triangle! The heroine, Amaya, is a tough and resourceful ice poacher. Orphaned and displaced, she doesn’t trust anyone easily, especially polar guards like Logan. But Logan has struggles of his own: drafted into service, he’s desperate to return home and save his small town from desertification. The town’s fate rests with Paul, heir to the powerful water company that controls the water supply. His involvement drags him from a life of privilege into a desperate, drying world where water is sometimes worth more than human life. The trio’s lives collide in a storm of harsh choices and uneasy alliances. I sought to create deeply flawed characters who would make a lot of mistakes, but ultimately learn from them.

2. Who designs the covers for your books and what is that process like for you as an author?
At present, I design my own covers. After hundreds of hours immersed in words, it’s refreshing to switch to a visual medium. I have some background in art, and the wealth of open-source rendering tools available online make it easy to convert my mental picture into a digital one. For Blue Karma as well as my forthcoming book The Darksider, I used public license images and graphics effects software to create bold, simple covers that reflect the stark worlds in the stories. Photorealism works for sci-fi, but my third book will be a historical fiction novel set in the tenth century, so designing that cover will be a fun challenge.

3. Describe your ideal writing spot.
As an independent author who must fit her literary efforts in the margins of a full-time job, I don’t have the luxury of being choosy about writing venues. My writing spot is a mental space, not a physical one. I’ve learned to jot down paragraphs anywhere I can snatch a few spare moments. However, my husband and I just moved to a new home that affords me a dedicated office/studio, so ask me again in a few months and I might have a favorite spot after all!

4. What is the best advice you have been given?
“Wear sunscreen”? Thanks, Mom! I can’t actually think of a single superlative piece of advice I’ve received over the years. Growing up, my parents did have a guiding principle for me: “follow your interests.” I chased my curiosity into lots of crazy places, but they supported me wherever it led. That approach let me evolve into a creative, passionate individual, and I’ve continued to abide by it as an adult. It keeps life adventurous!

5. As a child, what did you want to be when you grew up?
I went through dozens of vocational fantasies, from paleontologist to police detective. Anything adventurous and intellectual appealed to me. But I always aspired to write books, no matter what profession I chose. In that respect, being an author is the only career ambition I’ve nurtured consistently throughout my life. Publishing my debut novel last year realized a goal twenty-five years in the making. But I don’t see it as a destination achieved, just a important milestone on a continuing journey.

6. Which do you prefer: hard/paperbacks or ebooks?
I have tremendous affection for print books. The texture of pages, the scent of ink, and the weight of words is irreplaceable. I resisted e-readers for years until my now-husband—a voracious reader and Kindle devotee—bought me one as a gift. Now I love having an endless supply of books when I travel, as well as the ability to acquire a new one at the touch of a button. My biggest complaint about e-books is the inability to share them with family and friends. Part of the joy in books is passing them around for discussion! Today my reading is split about evenly between formats, but I still purchase select titles for a curated library of favorites.

7. If you could have any supernatural power, what would you choose and why.
Teleportation! Imagine how much more writing time I’d have if I didn’t have to waste precious hours stuck in traffic. Plus I could research any exotic story locale with ease…or just get away from my daily routines and let a new environment inspire me.

8. What book are you reading now?
The Terror, by Dan Simmons. A literal “chiller” about polar explorers stranded in the Arctic and hunted by a phantom creature, it seemed like ideal winter reading. Simmons is one of the few popular authors I’ve encountered who has found success in multiple genres. Since my next project is historical fiction, I wanted to see how a seasoned writer worked the transition.

Author Interviews Read It and Reap

One Less Warlock by Judith Post My rating: 4 of 5 stars I think it's hard in a short story to create a unique setting, characters, etc., and still get some sort of story line in. In One Less Warlock, Judith did an excellent job of molding the story in such a way that we got a taste of a distinct world and character personalities, and a complete story to go with it. In this short story Judith was able to pack in witches, vampires, a sexy Were, succubus, voodoo, murder, and mystery, all in only about 20 pages. Pretty amazing. I enjoyed the story and Babet, the main character, and am looking forward to more of her in the future. View all my reviews

Book Beginnings is a weekly meme hosted by  Rose City Reader .  Share the first sentence (or so) of the book you are reading, along with your initial thoughts about the sentence, impressions of the book, or anything else the opener inspires. You can find more information and how to participate on your blog  HERE!    "My father was a king and the son of kings. He was a short man, as most of us were, and built like a bull, all shoulders.  He married my mother when she was fourteen and sworn by the priestess to be fruitful." Title:  The Song of Achilles Author:  Madeline Miller Genre:  Historical Fiction/Fantasy Greece in the age of heroes. Patroclus, an awkward young prince, has been exiled to the court of King Peleus and his perfect son Achilles. By all rights their paths should never cross, but Achilles takes the shamed prince as his friend, and as they grow into young men skilled in the arts of war and medicine their bond blossoms into somethi 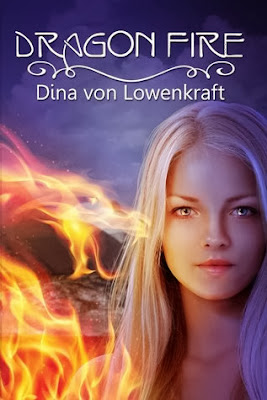 Dragon Fire by Dina von Lowenkraft   Genre: YA fantasy romance    Publisher: Twilight Times Books Number of Pages: 340   Cover Artist: Renu Sharma Book Description:  Some choices are hard to live with.  B ut some choices will kill you. When seventeen-year-old Anna first meets Rakan in her hometown north of the Arctic Circle, she is attracted to the pulsing energy that surrounds him. Unaware that he is a shapeshifting dragon, Anna is drawn into a murderous cycle of revenge that pits Rakan and his clan against her best friend June. Torn between his forbidden relationship with Anna, punishable by death, and restoring his family’s honor by killing June, Rakan must decide what is right. And what is worth living – or dying – for. Add Dragon Fire to your Goodreads shelf Buy Dragon Fire here:   B&N Amazon AllRomance 4 out of 5 stars Drawn to this book by the promise of dragon shifters, I was delighted when the story was as unique and intere