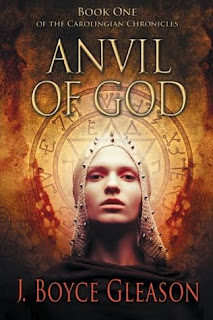 Anvil of God
The Carolingian Chronicles #1
by J. Boyce Gleason

It is 741. After subduing the pagan religions in the east, halting the march of Islam in the west, and conquering the continent for the Merovingian kings, mayor of the palace Charles the Hammer now wants the throne. Only one thing stands in his way - he's dying.

Charles cobbles together a plan to divide the kingdom among his three sons, betroth his daughter to a Lombard prince to secure his southern border, and keep the Church unified behind them through his friend Bishop Boniface. Despite his best efforts, the only thing to reign after Charles's death is chaos. His daughter has no intention of marrying anyone, let alone a Lombard prince. His two eldest sons question the rights of their younger pagan stepbrother, and the Church demands a steep price for their support. Son battles son, Christianity battles paganism, and Charles's daughter flees his court for an enemy's love.

Based on a true story, Anvil of God is a whirlwind of love, honor, sacrifice, and betrayal that follows a bereaved family's relentless quest for power and destiny.

With an AB degree in history from Dartmouth College, Gleason brings a strong understanding of what events shaped the past and when, but writes historical-fiction to discover why. Gleason lives in Virginia with his wife Mary Margaret. They have three sons.

Q & A with J. Boyce Gleason

Tell us a little bit about your main characters.
I once saw an interview with John Kennedy where he was asked what it was like to grow up in the White House. He paused before saying that to everyone else, Jack Kennedy was the president of Camelot and his mother was “Jackie O.” a cultural icon. He said that to him they were just, “Mom and Dad.” I have always wondered about the family dynamics of people of power. What happens to a family after succession? What happens to brothers and sisters when it comes to civil war? How do they navigate political versus personal decisions? What happens to their relationships, their love for each other?

That’s how I approached Anvil of God. Historically, it is about what happens to France after the death of their most powerful warlord, Charles Martel. But, I wanted to write about it from a personal perspective. Charles wanted to usurp the throne from the Merovingian kings but ran out of time. Just before he died, he divided the kingdom between his three sons: Carloman, Pippin and Gripho. The only thing that reigned after his death, however, was chaos. Why did his sons go to war? What led them to fight? Did it erupt all at once or was it little things that built towards a conflagration?

Central to the two story arcs in the book are Charles’ widow (and second wife) Sunnichild and his daughter Hiltrude. Secretly a pagan, Sunni raises her only son in her faith and hopes one day he will legitimize their religion in the face of the Church’s growing dominance. Trudi, is responsible for what has been called "the scandal of the eighth century.” Betrothed to a Lombard Prince, she left her father’s court in the dead of night to follow her heart with a Bavarian rebel. Suffice it to say that neither of these two decisions went over very well with the rest of the family.

In your opinion, what makes a good, strong lead character?
They have to be human. Too often, authors define their lead characters as almost superhuman. I like to see their flaws and passions and foibles. They also have to have a strong perspective so that as their decisions unfold, they make sense to the reader and add layers to the personalities. There are no “good” and “evil” characters in Anvil of God. There are people who make decisions they think are the right decisions based on their perspectives.

What or who do you see as influences on your writing style?
Jame Clavell, Herman Wouk, Mitchner.

Do you ever research real events, legends, or myths to get ideas?
All the time. I look for conflict. Or things we can’t explain. I like to say we know what happened in history, I like to write to find out why.

What is the best writing advice you have been given?
Don’t stop. Write every day - even for an hour - even if it’s garbage. Don’t stop.

If you could have any superpower, what would you choose and why?
Super vocabulary.

What do you do to unwind and relax?
Read, play videogames, go out with friends.

What book are you reading now?
The “Expanse” series by James S. A. Corey. Although I write historical fiction, I tend to read science fiction. It lets my mind wander.