Q & A with Michael Bronte: Porchball 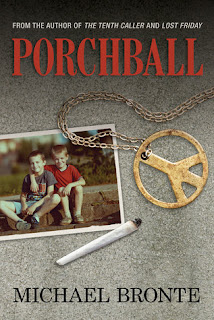 We had just come off one of the most memorable years in American history. Our boys were dying by the thousands in the jungles of Vietnam and the war protests were rocking our world. The assassinations of Martin Luther King and Bobby Kennedy rocked it even more. Our cities were being torn apart by riots, and then 1969 slung off ‘68 like a skater in a roller derby.

The Mets and Jets won their respective titles in 1969, two unbelievable victories almost impossible to imagine. Neil Armstrong landed on the moon, Ted Kennedy and Chappaquiddick happened in 1969, as did the SDS campus takeovers at Columbia and Harvard, along with the Charles Manson murders. Most memorably, our boys were still coming home from Vietnam in body bags, and the new President Nixon talked peace while the hippies stoned themselves out on pot and LSD while positioning the counter-culture as the alternative to “The Establishment.”

Brownie wrote his own history in 1969: he smoked his first joint, and got laid, both of those momentous events taking place in the sun and the mud at Woodstock. He also matriculated at Alliance College in Schenectady, New York, in September of that year, the unrest of the times serving as a confusing backdrop for an innocent teenager growing up in a not-so-innocent era.

There was no war in Schenectady, but people died, and Detective Michael Gravachevsky watched it happen. A fraternity house cook at Alliance fronted the evil crime network Gravachevsky had run into head-on, and here the lives of two boys from the Berkshires in Massachusetts, Brownie and his best friend Badge, become inextricably tangled in Dandy Don’s web of crime, bribery, depravity, and degradation. One of the boys takes the high road, the other doesn’t. From professors to ballplayers to strippers, Dandy Don ruins the lives of everyone he touches.

Porchball is a book that that deals with loyalty, betrayal, and deception, all twisted together as the characters’ lives are funneled into a single situation where the only common goal is to stop Dandy Don at all costs. Ultimately, it’s the code by which the game of Porchball is played that rises above all other of life’s principles. When a fraternity brother explains that no one cheats at the game, Brownie doesn’t quite understand. The answer is quite simple: “Everyone is taken at their word,” says the fraternity brother, “and everyone does the right thing.”

Michael Bronte is a graduate of Union College in Schenectady, New York, and George Washington University in Washington, D.C., and lives with his wife of 36 years in Gaithersburg, Maryland. "All of the heroes in my novels are everyday people," says Bronte. "Any of them could by your next door neighbor. None of us really know what we're capable of until the time comes for us to reach beyond the boundaries of our everyday lives. Remarkable feats of courage are performed everyday, by everyday people. It's amazing."

​ As a young teenager I remember reading paperback mysteries under a huge oak tree outside my parents’ neighborhood grocery store in Dalton, Massachusetts, a small town located in the heart of the Berkshires. I can recall pulling a book from the rack and getting locked in to those novels as the fragrant summer breeze of Berkshire County tried to turn the page before I was done reading it. I don’t know why, but I was greatly affected by a book titled The Fan Club, by Irving Wallace. When I was done reading it, I can still recall thinking that someday I’d be able to write a book like that on my own; I knew I could do it.

Well, the idea stayed dormant for over thirty years while I did what I thought I should have been doing for a living (looking back, it all seems so trivial sometimes) until I rekindled my infatuation with writing novels. Now, many years after that, and many mistakes and many failures later, there are five Michael Bronte novels available. They are: The Dealership, Presidential Risk, Porchball, The Tenth Caller, and Lost Friday.

Q & A with Michael Bronte


1. Tell us a little bit about your main characters.
The main characters are two teenaged young men who are entering their first year of college in the year 1969 amid the turmoil of the Vietnam war and all of the antiwar/hippie protest movements of that time.  It is essentially a coming of age story for both of them.  The main character named Brownie (Wallace Brown) feels the dual pressures of conformity to the Establishment and how he was brought up, as does his best friend Badge (Mark Badger).  One takes the high road, one does not, and both become inadvertently but inextricably tangled in a vile web of deceit and degradation cast out by an organized crime drug dealer named Dandy Don who works as a fraternity house cook on the campus of Alliance College.  Both young men are torn between the emotional tug of loyalty to each other as they find themselves going in separate directions, while trying to define their own direction in the very mixed up world of the late 60s where the traditional values and spiritual norms of previous generations have been shattered.

2. How long have you been writing, and when did you first consider yourself an author?
Really good question.  I've been writing for 20 years, but really didn't consider myself an author until fairly recently.  I always believed that my material was good and that the plots worked, but I considered my interest in writing more of a hobby than anything else.  It was my family that convinced me to put the books out and to self publish them, which I resisted for a long, long time, feeling that unless I was able to secure an agent and be picked up by a publishing house, I was not a legitimate author.  It took me a long time to realize that many (and I am tempted to use the word "most" here) of these so-called experts were no better a judge of a good, well written book than I am.  In other words, I came to the very arrogant belief that it was a very elite club where people who don't necessarily know their ass from their elbow (this is your ass, this is your elbow) are paid to say "no."  I also believed that a legitimate author needed to have multiple products out there, otherwise I would not consider myself an author, but a flash in the pan.  Last year I put my books out there and I am suffering through the multiple opinions of reviewers, but for the most part, the reviews have been quite favorable.
I now consider myself an "author" and on top of the five novels I have out, I will be putting out more as I march forward.  I've come to believe that lot of being good, and a lot of being an author is a matter of opinion.  I have to believe in myself and hold on to my opinion that I can write.  You may not like my material, but you can't say I'm not a writer.

3. What do you see as influences on your writing style?
I like to use realistic language and have my characters come from everyday circumstances.  If the f-word offends you, then you probably won't like my books, but in my life and where I came from, that's how people talked.  I don't think the use of gratuitous profanity is good writing, but if a real life character would use coarse language, then the dialogue should be that way.  Gritty settings, nefarious characters, border line honesty, all of that lends to flawed characters you can pull for in their struggle between good and evil.  I like to put characters into settings where it would be very easy for them to slide to the dark side, whatever the dark side would be for them.  I like characters that always seem to wrestle with their own internal struggles, whether it be confidence, honesty, loyalty, integrity, etc., the reason being that without this internal struggle there's no occasion to rise to, if that makes sense.  My heroes are just everyday guys and gals.  Flawed characters: I guess I read that somewhere.  I think Nelson DeMille does that really well.  Usually such characters are real smart-asses, just another way to cover up their own insecurities.

4. What was your inspiration behind Porchball?
A good part of my growing up years were in the 60s and 70s, and as I look back on those years it's almost impossible for me to believe anyone could have grown up during that time without some real value conflicts.  I mean, as a young person you saw everything that was taught to you by your parents kind of dumped out like old toys out of a toy box and stepped on, or torn apart.  So what was right?  Was it what your parents and your teachers taught you, or was it right to rebel against all that and go in the opposite direction and redefine your own morality.  It was a real struggle of the time, and I though I wanted to write a book that illustrated this from a middle class point of view, again, the everyday people point of view.  Lower class people had a lot to rebel against.  Upper class people gave in to the popularity of the anti-Establishment movement, but most of them turned out to be sell-outs, in my opinion.  The middle class could have gone either way, depending on how they developed their own inner beliefs.  That's the message behind Porchball, and depending on which way you swung, the experiences of those times formed the basis of how you would live the rest of your life.

5. What do you do to unwind and relax?
Cook, write, have sexual fantasies about large appliances.  Just kidding.  I was a baseball player in my younger years and I like the sport a lot.  I also play guitar, although I've come to realize I'll never be Jeff Golub (look him up).

6. If you could be any supernatural creature, what would you choose and why?
Hmmm.  Supernatural means beyond the laws of nature.  As such, I think I'd like to be King Kong because I think he can probably eat whatever he wants.  The downside is that I don't think there are a lot of Queen Kongettes out there.

7. What book are you reading now?
My wife bought me two books by Rick Atkinson about World War II and I'm reading The Guns at Last Light which is about the war in western Europe.  Like the 60s, this was an even more amazing time.  Talk about some shit going on....