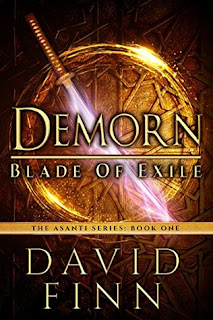 Demorn: Blade of Exile
The Asanti Series #1
by David Finn

Obsessed with her lost lover, Demorn seeks vengeance for the destruction of her home world, Asanti. She remembers the Fracture event that tore apart reality and is haunted by dreams of Firethorn, the magical fantasy dimension where her girlfriend was assassinated.

Stranded with her brother in the dark, dazzling future city of Babelzon, Demorn sells her burning sword and her pistol to the highest bidder, doing missions for the Innocents, a Clubhouse of mercenaries and assassins based deep inside the city.

On a Club mission Demorn uncovers a terrifying conspiracy of multi-dimensional, corrupted gods hiding in plain sight, infecting the timeline. Torn apart from the Innocents and forced to flee into the Grave Dimension filled with undead hordes, Demorn must face the horror of a reality virus gnawing on the bones of the universe itself, an Ultimate Fate destroying alternate dimensions and worlds.
Demorn, the ultimate mercenary, exiled and far from home, must risk everything in a dark quest for something bigger than a bounty if Babelzon and the Innocents are to be saved…

DEMORN: BLADE OF EXILE is Book One in The Asanti Series.

Q & A with David Finn


1. Tell us a little bit about your main characters.
Demorn is the lead character in DEMORN: BLADE OF EXILE and DEMORN: CITY OF INNOCENTS . Demorn is a dimensional-sliding assassin and the leader of the Innocents, a Clubhouse of mercenaries based in the future city of Babelzon. She is one of the last survivors of the world of Asanti, which has been ripped apart in the Fracture Event which tore apart most of reality, scattering it into pocket dimensions and dooming much of it the reality virus of Ultimate Fate.

In her chest is embedded a ruby heart which contains Xalos, the Sword of Justice. Demorn is blessed by the Goddess Adolin Mars. This burning katana of purple fire emerges from Demorn's chest when called upon and she uses the sword to rain down her version of Justice upon her enemies and prey.

She has wielded this holy blade for almost ten years. Demorn is a gambler and light-hearted and sarcastic, but she harbours great compassion for those she loves. She is not perfect and her own debts and mistakes in life and love catch up to her at times!

Against her will and whilst trying to resurrect her dead girlfriend, Demorn is dragged into a battle for the survival of both the Innocents and Babelzon, against the same forces which led to the destruction of Asanti and much of reality years before...

Smile is Demorn's brother, who she is very close to. Since crash-landing on Babelzon as they fled the ruin of Asanti, Smile has been seriously physically damaged in the crash and later at the hands of scientists who seized him- Demorn has rescued Smile from their clutches and he resides mostly in the ruins of their damaged spaceship to which he is connected. Smile is now part virtual reality AI and assists Demorn in her missions for the Innocents.

Alex is an extremely deadly and beautiful friend and rival of Demorn, and she both assists Demorn on some mercenary missions and is one of her chief rivals for many a cash bounty!

Kate is Demorn's ex-girlfriend, who was killed some years ago in the fantasy dimension of Firethorn on what should have been a romantic holiday for the both of them. Demorn managed to extract part of Kate out of this dimension, but Kate is now an actress/model who is hustling for reality TV roles after her series got cancelled.

Part of Kate's soul died in Firethorn and their relationship suffered and ended in Babelzon, which Demorn feels responsible for. Demorn is obsessed with trying to resurrect Kate in the fantasy dimension as she believes this will rekindle their broken romance in the regular world. Most of her friends disagree!

She is one of the last survivors of the world of Asanti, which has been ripped apart in the Fracture Event which tore apart most of reality, scattering it into pocket dimensions and dooming huge sections of the universe to the reality virus of Ultimate Fate.

2. Who designs the covers for your books and what is that process like for you as an author?
The covers for both of my books in the Asanti Series, DEMORN: BLADE OF EXILE and DEMORN: CITY OF INNOCENTS have been done by Deranged Doctor Design and I honestly cannot express enough just how happy I am with their work. They provided covers based on some loose but detailed ideas I gave them, and I am very pleased with their work. I gave them room to move and they exceeded my expectations. I will be using them again for Book 3 in the Asanti Series, DEMORN: SOUL FIGHTER.

3. Describe your ideal writing spot.
I have an office at home which I do most of my writing in. I do move around the house and we have a nice shaded balcony with a lovely collection of plants which I find relaxing to write in as well. I make notes for the series constantly on my phone through out the day and in transit, but I like relative peace and quiet to write in. I often play soft electronic music without any words as I find it relaxing and stimulates my imagination.

4. What is the best advice you have been given?
I remember hearing Matt Fraction say something along the lines of "Stop daydreaming, just write!" which I find very helpful - it's amazing what avenues open up once you start typing. Also, remembering to keep the action coming nice and fast for the reader and the plot moving along is important advice I received early on and still try to follow.

My editor is a great sounding board and source of clarity for the whole story and she provides excellent book-specific advice.

5. As a child, what did you want to be when you grew up?
A writer, after I quickly realised I wasn't close to pro level in either tennis or cricket!

6. Which do you prefer: hard/paperbacks or ebooks?
I prefer reading novels and comics on my ipad through the Kindle or comixology app. I also have a large comic book collection in both trade paperback and hardcover which I love and I do read when i have a chance, but most of my reading is done on the train commute at the moment. I do love sitting down at home though with one of my big comic omnibuses and reading along!

7. If you could have any supernatural power, what would you choose and why?
Tough question! As a comic and fantasy fan, this is a conversation I have had with myself before! I've always thought it would be cool to be telepathic or to fly, but I also love the powers of Wolverine, specifically his healing ability and claws!

I guess it would be to be a telepath or have the maxed out healing factor AND the claws. I'm obviously a highly trained martial artist as well in this scenario. :)

8. What book are you reading now?
I am reading two books at the moment, "Levons Night" by Chuck Dixon and "Heavens Prisoners" by James Lee Burke. I really enjoy and recommend both books.