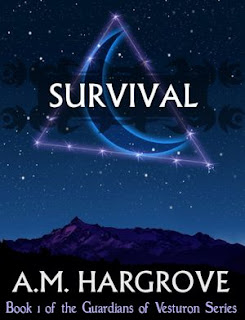 Survival, book 1 of the Guardians of Vesturon, a YA paranormal romance

"Maybe I was caught between the two worlds. I was having serious trouble distinguishing fantasy from reality."

While on a backpacking trip in the Great Smoky Mountain National Park, nineteen-year-old Maddie Pearce finds her world has been thrown into a vortex and is madly spinning toward the impossible. Abducted by a mad psychopath, Maddie narrowly escapes with her life. But that is only the beginning. Her mysterious rescuer introduces her to a world that Maddie has difficulty accepting as reality. Will this strikingly gorgeous stranger be the key to her future or will she return to her mundane world, scarred from her experience? Follow Maddie as she is forced to make difficult decisions that carry her to mysterious places.

Then, unexpectedly, three brightly glowing melon-sized balls of light came soaring across the dark sky. When they were a few feet away from me, they elongated into long thin slivers. Moments later, the slivers expanded and then took form into three indistinct shapes.

I kept blinking my eyes, not trusting what I was seeing. I was positive I was hallucinating. This must be what happens right before you die.

Then, the indistinct shapes morphed into three men—three very tall, powerfully built men. They were identical in that they were all dressed alike—wearing black hooded cloaks that fell to their ankles. The hoods hid their faces, but I had the strangest feeling they were there to help me. 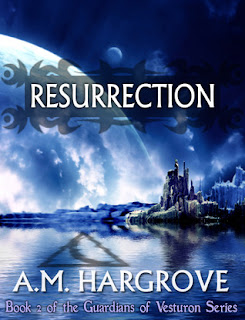 Resurrection, book 2 of the Guardians of Vesturon
"Maddie knew she was dying. Her life started to flash before her. She had visions of running down the soccer field, scoring a goal, eating her mother’s yummy, homemade, sticky cinnamon rolls, standing in her foyer listening to the police tell her father that her mother had been killed in a car accident. Each vision was disturbingly clear—as if it was happening again."

Rayn Yarrister, the first-born son and Leader of The Guardians, has been imprisoned on Vesturon for breaking their most sacred of covenants. He is suddenly jolted by Maddie's telepathic pleas for help, as her life hangs in the balance. Can he alert The Guardians in time to save his soulmate? Or will he face his trial alone and broken without his one true love?
In Resurrection (Book 2), The Guardians of Vesturon are facing their biggest challenges as Earth is threatened by an invading species from a distant planet intent on destroying it for its resources. The Guardians, as protectors of the universe, have been assembled to defend not only Earth, but other vulnerable worlds as well. The Yarrister family is threatened by an unknown entity intent on discrediting them. Will they uncover this plot in time to save themselves from ruin? Will The Guardians succeed in stopping the Xanthians, or will Earth be invaded and ravaged by this marauding species?
Get your own copies!!
Survival (currently free!!):   Amazon  Barnes & Noble  Smashwords
Resurrection:  Amazon  Barnes & Noble  Smashwords

Find out more about author
A.M. Hargrove on Goodreads
Posted by Shut Up And Read at 17:37