Between the Land and the Sea by Derrolyn Anderson 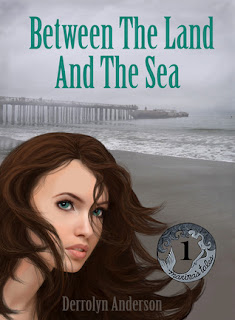 February 6, 2012
I started the prologue of this first installment to Marina's Tales and just after it I realized that I was mistaken to have started the book so late at night. I simply could not convince myself to do the reading in a better time the next day. So even if there were quite too many distractions for me to read all that easily, I managed to hit the pages stubbornly and resolved to adore just another tale that is worth telling.

I found myself grinning as I got to every chapter. The book is written in a such a way that the reader would want to engage more in Marina's thoughts and expectations. Much of the plot was as surprising to me as it seemed to Marina and the thrill of it all pulled me more into the story.

There are really few characters but I can say that the author established the role of each very well. Marina's circle was so appealing to me that I kind of envied the life she had. I must say that if Marina's narration affected me this much, then most of the young adults would definitely get to relate to her world perfectly well.

I only fretted a little about the mermaid adventure parts. They were not as exciting as it thrilled me from the start so I could tell that it was just the beginning of a series. I didn't know it was a series when I started reading it. But now, I will surely read the rest of the books in the series. I also enjoyed how the evolution of romance between the characters unfolded although I expected a bit more intensity towards the end.

The title of the book, Between the Land and the Sea, summarizes the story. There were even proportions of reality and fantasy, and land and sea parts that gave all the gist to Marina's tales.

This book is not only a lovely and fresh depiction of the classic mermaid myths but a great account of building relationships (among families and friends) as well. I recommend this book to the readers who have been long lost behind YA fantasies since Twilight. As it had been for me, this is one awesome book to restart the passion for fantasy with.
Goodreads review
Buy your own copy here:  Amazon   Barnes & Noble   Smashwords
Posted by Shut Up And Read at 20:06