Half Black Soul by H.D. Gordon 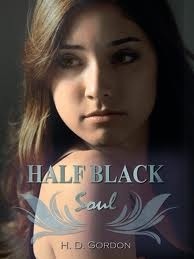 
Well, not really sure what to say on this one. :) This book was pretty awesome! I received this book from Shut Up & Read.

I had a little bit of trouble getting into the story at the beginning. I'm not sure if it was just my frame of mind when starting to read or what, but as I continued to read I was drawn in on this new adventure.

Alexa is still her spit-fire self. Unafraid of the consequences of her actions, not caring what people think of her and unsure of what to do in her love life. (I know who I would pick...just sayin') She finds herself on an unexpected mission to save someone whom everyone thought was dead. During this time, she struggles with the choices that she was forced to make (or was she?) and whether or not she is evil or just doing what was necessary to carry out her mission. Also, along the way, she finds herself drawn romantically to Kayden (my choice in the triangle by the way) and unable to deny her need for him. I wonder where this love will lead in the next book?!?

Nelly, Alexa's sister, is left back at Two Rivers. She begins to catch on that things are not quite what they seem. She learns secrets, finds new enemies and realizes that her powers are becoming much more than what she thought was possible. She begins to take confidence in herself and her ability to protect the important people in her life, including herself.

Jackson...well, that wolf-boy just plain gets on my nerves. Grrrrr! I was not shocked at the twist concerning him. In fact, I thought it made sense. :)

Kayden, that yummy goodness! Whew...is it hot in here?!? I think Alexa should pick him!! I liked that one of the chapters was from his perspective, and that we got to see a little snippet of his feelings for Alexa.

Oh, the twist at the end blindsided me! Did NOT see that one coming. I cannot wait for the next book!

Thank you to H.D. Gordon and Shut Up & Read for the opportunity to read this fantastic book! Y'all made my week!!

Buy your own copy of Half Black Soul here:  Amazon   Barnes & Noble  Smashwords
Posted by Shut Up And Read at 15:37