The Scarlet Dagger by Krystle Jones 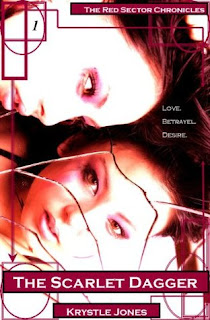 The writer was showcased with the plot, I really liked quite interesting. She combine some of the Apocalypse (the red moon, end of the world for humans),the emergence of a kind of-resident-evil-virus-kick-ass-hunter-girl (I did not like the plot of that movie) but I love that she was able to combine this things. Have much influence from other vampire stories,has a touch of classic and modern vampire-stuff.

Sloane is a very strong girl, haunted by guilt. ORION was her brother and ROOK, orion's best friend were turned on Halloween night when they were visiting a house "haunted" because Sloane insisted to go there. After that pratically is left alone, since her father died of cancer, she stays with her mother who is the soveringe of Pittsburgh, she is a cold, only cares about appearances, their political status ... and mother-daughter relationship is not good.

After the Eclipse, the night of Halloween when the world distorted, the government created a new way of operating-save-from-vampires and created the white sector (only living humans). Sloane haunted by her guilt decided move in search of her brother (she has the hope he is still alive) and goes to the red sector (inhabited by vampires),when she return to her old home, she meet Aden, after a long fight with him, who discovers she has the "mark of the creator" he turns her into vampire ... and so the story unfolds ... she moves to a base secret where he attended training at the "academy" and get used to life as a vampire, is making friends and learn to appreciate them. All this while she was there,she live in Aden's house with his mom, she learn to see them as her family....she became falling in love with Aden as he is too.

This book is a success ... I'm anxious to read DARK HORIZONS and see what happen next!!!!!

Get your own copy of The Scarlet Dagger:  Amazon   Barnes & Noble   Smashwords
Posted by Shut Up And Read at 19:39