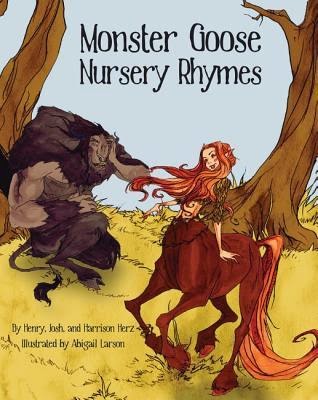 Enter an enchanted land of mythical creatures where manticores reign and ogres roar-a land of mystery and fright. A unique twist on traditional rhymes of everyone's youth, "Monster Goose Nursery Rhymes" presents a more sinister approach to these childhood classics, and yet the sing-song nature of the poems renders them playful and jovial at the same time. Little Witch Muffet is not frightened by a silly, little spider; she simply adds him to her stew!

Rotten zombies, giants, dwarves, and goblins mingle with werewolves, centaurs, and fauns. Follow along the skeleton stepping stones, scale up a palisade, claw at the window of a tasty child and bake him into a pumpkin shell. Monsters cook up delicious elvish pie, too! Every kid who has an eensy weensy bit of sense wants a pet with feathers white as snow, who flies like an eagle and bleats like a goat-a hippogriff, of course!

Six forest sprites with four times as many pixies escape from a loaf of bread atop the elaborate table of the fey queen; her feast has flown away! If you enjoy mischief and have a penchant for the morbidly hilarious, the Herzs' rhymes will satisfy your mythological curiosities.

Larson's illustrations give new life to these ancient figures, and her artistic style employs the bold lines and colorful movement of an action-packed comic book. The author also includes a "bestiary" with information about the book's legendary creatures, which hail from Scotland, Germany, Italy, Persia, Haiti, and Scandinavia. 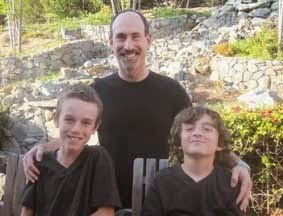 Like their father, both boys are big fans of fantasy, science fiction, and the annual San Diego Comic-Con convention. They have an entrepreneurial bent too. They've started three web-based businesses selling LEGO party favors, custom cast bases for Warhammer, and painted concrete yard sculptures. Artwork by Josh appeared in the Mar/Apr and Jul/Aug 2014 issues of Cicada Magazine.

Q:  Who was the illustrator for your book and what is the illustration process like for you as the author?
A:  The illustrator of my picture book, MONSTER GOOSE NURSERY RHYMES (www.birchtreepub.com/mgnr.htm), is the amazingly talented Abigail Larson. She had exactly the perfect illustration style to complement the monster-based rhymes - slightly dark, but not scary.

Normally, the artwork for a traditionally published picture book is created by the artist under the supervision of the publishing house's art director (and NOT the author). However, this book was an unusual case in that Abigail and I collaborated BEFORE the book was sold to Pelican Publishing. So, the collaboration was just as if we were doing an Indie-published book.

For each image, I supplied the text and some direction about the background and scene composition. Abigail would do an initial sketch, there might be some feedback, then she'd go full color, and there might be some final feedback. I encourage illustrators using PhotoShop to work in layers, as this makes fiddling with the image elements and text so much easier.

Q:  I understand you co-write with your sons. How did that start and how long have you been writing together?
A:  A few years ago, I wanted to share my love of fantasy with my young sons. They were too little for watching most of the fantasy and sci-fi movie classics, and there are only so many good fantasy books available for that age range. Struck by inspiration one day, I came up with a way to share the joy of entering the magical realms of fantasy. I would write a fantasy book for them.

What I did not anticipate was that my boys would give me feedback on the story. They devised some of the character (Nimpentoad) and creature (Neebel) names, and made plot line suggestions. And who better to help make the story appealing to kids than other kids? So, the goal of interesting my sons in fantasy transformed into also encouraging them to write.

Originally, I only shared the story of NIMPENTOAD with family, for their own enjoyment. My sister-in-law suggested that I consider publication because she felt the story was much better than many of the books she was seeing for her similarly-aged kids. We decided to give it a try, and that launched my writing career.

Now, NIMPENTOAD (www.birchtreepub.com/nimpentoad.htm) has 89 Amazon 5-star ratings and has ranked as high as #1 in in Kindle Best Sellers large print sci-fi & fantasy. It's been featured in Young Entrepreneur, Wired GeekDad, and CNN.

Q:  What do you feel is the biggest challenge to indie-published authors and how did you overcome that?
A:  First, I encourage would-be Indie authors to first think hard about whether Indie or traditional is the best path for them. Often I hear people go Indie because they couldn't interest an agent or publisher in their manuscript. I'd argue that's NOT a reason to go Indie. Stop and think about WHY you are seeking publication. Understand that while Indie publishing gives you all the control (which isn't necessarily a good thing), it also all gives you all the work/expenses. I've written a post on this subject for The Write Life (http://thewritelife.com/self-publish-...).

With terrific publishing platforms like CreateSpace, the biggest challenge that Indie authors face when Indie publishing is promotion. If you build it, they will NOT come. With Indie-published books you have the never-ending task of pushing your book sales. Most Indie-published books sell fewer than 100 copies. Indie-publishing was a terrific learning experience. But, I'd rather be writing than selling, and that's why I've switched my focus to seeking traditional publishing.

A final note: do NOT think you can first self-publish the book and then seek traditional publication. Agents and editors won't be interested in a self-published book unless it has sold REALLY well (e.g., 10,000 copies in a few months). And frankly, if it's selling that well, why switch to traditional?

Q:  Describe your ideal writing spot.
A:  I write on a computer in my home office. BORING, I know. I have some lovely spots in my yard, but between the glare from the sun, lack of electrical power, lack of wifi, and the distraction of nature's beauty, I'm more productive inside.

Q:  If you could have any superpower, what would you choose and why?
A:  I ask that same question when I interview authors on my blog at www.henryherz.com. I'd say being able to morph into other people and things, like Mystique in X-Men. That would enable me to fly, swim underwater, run fast, and get backstage at rock concerts.

Q:  What do you do to unwind and relax?
A:  I very much enjoy writing children's books, and all the social networking that goes with that. You have to love it, because you're almost certainly not going to earn a living doing it. Of course, I also enjoy reading fantasy and science fiction. If I really want to let my brain relax, I watch TV or movies.

Q:  Hard/paperbacks or ebooks?
A:  I'm format agnostic. I will happily read print or ebooks.

Q:   What book are you reading now?
A:  I'm reading SKIN GAME, the latest in Jim Butcher's Harry Dresden urban fantasy series. Butcher fans might be interested to know that I moderated a San Diego Comic-Con panel that included Jim, and he (along with other New York Times bestselling authors) has a short story in my Indie-published dark fantasy anthology, BEYOND THE PALE (www.birchtreepub.com).

With my picture book MONSTER GOOSE NURSERY RHYMES (www.birchtreepub.com/mgnr.htm) about to release, I'll also be reading that book (over and over again) to kids at SoCal Indie and Barnes & Noble bookstores.