“...The next time I opened my eyes, I was in the morgue.
This, all by itself, is enough to really ruin your day.
I was lying on the examining table, and Butters, complete with his surgical gown and his tray of autopsy instruments, stood over me.
'I'm not dead!' I sputtered. 'I'm not dead!'" 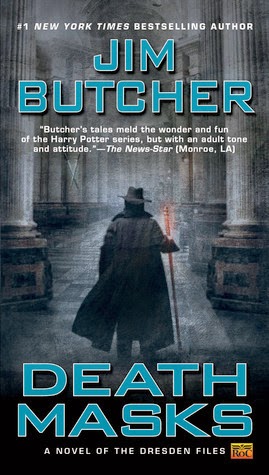 Harry Dresden, Chicago's only practicing professional wizard, should be happy that business is pretty good for a change. But now he's getting more than he bargained for.

A duel with the Red Court of Vampires' champion, who must kill Harry to end the war between vampires and wizards...

The missing Shroud of Turin...

A handless and headless corpse the Chicago police need identified...

Not to mention the return of Harry's ex-girlfriend Susan, who's still struggling with her semivampiric nature. And who seems to have a new man in her life.

Some days, it just doesn't pay to get out of bed. No matter how much you're charging.

My Thoughts
This is another of my favorite series!  It's been a while since I've read this one, so I am going to be re-reading this book before continuing on with the series.

Harry Dresden is one of my favorite characters.  He is a down to earth, overall good guy.  He is a wizard, practicing openly out in public, and he has a knack for getting himself into trouble, all for the sake of helping others.  Though the storyline itself is enough to make me love this series, Harry's dry humor is the cherry on top.
By Sheri - April 21, 2014