Teaser Tuesday is a weekly Meme hosted by
Should Be Reading!
where you share one or two “teaser” sentences from your current read.

"You know, in the Twelve Kingdoms, the men don't have to tie up their brides to keep them from running off."

"Don't they? Perhaps the women are more biddable there."


I opened my mouth to retort but couldn't come up with a good answer.  "How long, then?"


"The ties must remain until our marriage bed."


He glanced down, amusement sparking through the dark blue of his eyes.  "Anxious, my sweet?"


"I'm thinking more of the inconvenience in the interim," I answered drily.


The Twelve Kingdoms: Mark of the Tala
by Jeffe Kennedy 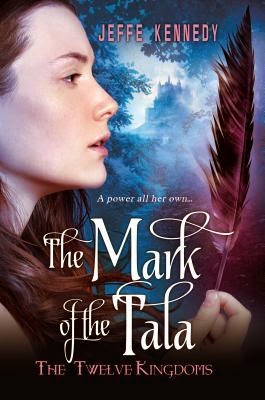 Queen Of The Unknown

The tales tell of three sisters, daughters of the high king. The eldest, a valiant warrior-woman, heir to the kingdom. The youngest, the sweet beauty with her Prince Charming. No one says much about the middle princess, Andromeda. Andi, the other one.

Andi doesn't mind being invisible. She enjoys the company of her horse more than court, and she has a way of blending into the shadows. Until the day she meets a strange man riding, who keeps company with wolves and ravens, who rules a land of shapeshifters and demons. A country she'd thought was no more than legend--until he claims her as its queen.

In a moment everything changes: Her father, the wise king, becomes a warlord, suspicious and strategic. Whispers call her dead mother a traitor and a witch. Andi doesn't know if her own instincts can be trusted, as visions appear to her and her body begins to rebel.

For Andi, the time to learn her true nature has come. . .

My Thoughts
This banter between the male and female MCs in this book was a lot of fun.  In this quote they are discussing one of the wedding customs of the Rayfe's people, which is different than Andi's people.  In short, during the ceremony one of the bride's wrists and one of the groom's wrists are intricately bound and must stay that way until after the marriage is consummated.