Teaser Tuesday #15: Out of Reach by Missy Johnson

He had a knack of being able to convince anyone to do anything, which was one of the reasons he would've made a great lawyer.  In the third grade, he convinced the entire class that wearing socks to bed would make your feet fall off.  Deb had gotten a lot of angry calls from parents that weekend. 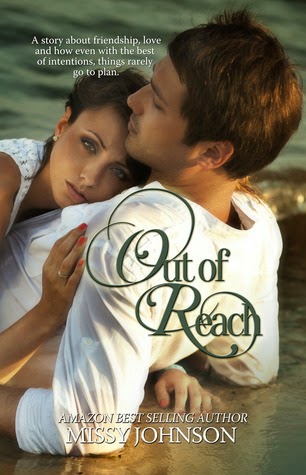 My best friend was dying and I was in love with his girl.

Andy and I had been best friends since we were eight-years old.  Watching him slowly fade away, ever closer to his final breath, made me so incredibly angry. I knew there was nothing I could do to change it--I had given in to despair, but Andy had not. He had one last hand to play.

He wasn't going to simply sit back and wait for Death to claim him--not Andy. He was going to live life until he couldn't hold his eyes open any longer.

Andy didn't want to die in some sterile hospital and asked me to take him and Emily to the beach. It would be our last road trip together.

Emily. Emily was a problem for me.

I harbored a secret that would have torn our friendship apart. I was in love with Andy's girl, and had been since she'd walked into our sixth grade class, so many years ago.

So what kind of person am I? My best friend is dying, and it's
awful--but my heart still aches for his girl. I hate myself for
thinking beyond Andy's death and whether there could ever be a future for Emily and I, but I can't help it.

I'm in love with her.

My Thoughts
This quote is Seth talking about his best friend, Andy.  Andy is the kind of charismatic person that could sell ice to Eskimos.  No matter what he asked his friends to do for him, they would do it.  Not only because he was convincing, but because they loved him and he was dying.
By Sheri - May 13, 2014