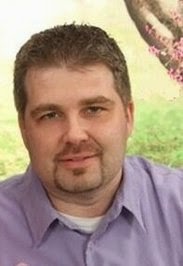 A fan of fantasy fiction since he was a child, B.R. Maul has always enjoyed a good story, whether it came in the form of books or role playing games like Dungeons and Dragons.  Maul has lived in the heart of the Red River Valley for most of his life. He was born in Fargo, N.D. in 1974. A house fire changed his family’s course when he was a child, and in the early ‘80s, his parents took over a small family business in Moorhead, MN, where he remained for his school years.  Maul holds an undergraduate degree in secondary English education with an emphasis in creative writing. He spent a few years working as a substitute teacher, and since fall 2013, he has dedicated all of his time to writing.  Maul’s first novel, “Portals, Passages & Pathways Part 1: In the Land of Magnanthia” debuts March 25. The book is the first installment in a fantasy series.  Maul lives in Fargo with his wife and two kids. The couple is expecting their third child in March.

Q: “Portals, Passages & Pathways” is billed as “a story of our greatest journey, to discover our purpose in this life, and the consequences of the choices we make to get there.” How did you get started writing this series?
A: We all have a purpose in life. We just need to take time to discover what that purpose is. Mine, I learned, is storytelling. When I was a teenager I remember thinking that it sounded ridiculous to wait until the end of my life to do what my heart longed for. Unfortunately, like the majority of people, I bought into the lie I was supposed to pick a “real” career, make as much money as I could, and then retire. After fifteen years of making, spending, and chasing money, something happened. People dear to me were struck down from terminal illness, and some died. I came to realize I was on the wrong path…but, like all paths, it would still lead me to the inevitable, my own death. I’d been arrogant, and naïve, assuming I knew what tomorrow was going to bring and that there were going to be enough tomorrows so I could retire and live purposefully. I quickly got off that path while I still could and started down the right path. I began writing.

Q:  As a reader, it’s easy to get lost in the world of Magnanthia. For people who haven’t read your book yet, can you describe the setting?
A:  Magnanthia is enchanting and extremely beautiful. The spiritwood trees almost glow their colors are so vibrant, and the intricate design of sea silk, a.k.a. blue quagmire, is miraculous. Magnanthia is also monumental. Shiftwood trees grow hundreds of feet high with girths bigger than houses, and Paramount Peak is so large they say all the other mountains in Magnanthia could fit into it. The indigenous life is spectacular…and mysterious. The land has energy of its own.

It’s also foreboding. A small part of it has spread like cancer to outlying lands creating a chaotic environment where glamour and wasteland collide.

Q:  Simon and Jak are such divergent characters, but what are some ways that they are similar to each other?
A:  Simon and Jak both feel segregated from the rest of the world. They don’t fit in with their peers and have a hard time relating to others. They are also both bullied. However, how they respond to feeling segregated and to being bullied are completely different.

Q:  What do you think makes them so relatable?
A:  They’re genuine. Simon and Jak may have different backgrounds and circumstances, but they have the same kinds of feelings, emotions, and reactions to their problems like the rest of us. They, too, want to love, be loved, be happy, and find their place in this world. And like you and me, Simon and Jak make their share of mistakes along the way.

Q:  What drew you to the fantasy genre when you were a kid, and why do you think that genre has stuck with you all these years?
A:  The adventure! There’s something about dragons, castles, heroic knights, journeys to faraway places, creatures and monsters, spells, magical items, and lost treasures that whisks me away from the endless grind of reality, straight into the depths of the wondrous imagination. The fantasy genre has stuck with me for so long because it had the greatest impact on my childhood, and for that reason, the rest of my being.

Q:  Did growing up in the Red River Valley influence your writing at all?
A:  The Red River Valley has a unique way of growing at its own pace, almost untouched from the rest of the nation. It’s the last place to catch onto trends, fashions, and movements, if at all. I’d have to say I grew up with a rather wholesome perspective morally, spiritually, and culturally. I believe this may have influenced the fact I enjoy reading and writing young adult fiction. Our teenage years are full of first-time moments that sculpt us into the adults we eventually become. And as a writer, I find it more challenging to bring a reader into an intense moment without using obscene or abrasive language.

Q:  Reminiscent of three of the greats – “The Chronicles of Narnia,” “The Lord of the Rings” and “Harry Potter” – how did those popular book series shape the direction you took with “Portals, Passages & Pathways?”
A:  Magnanthia and Earth are separate from one another. Like Narnia, a person steps out of one realm and into the other. This is a fun way of overlapping fantasy with real fiction.

“Portals, Passages & Pathways” is an epic story in the same sense “The Lord of the Rings” is epic in that there are multiple subplots taking place at the same time with underlying themes in each. And although much is yet to be seen, the lore of elves, dwarves, other demihumans, and some of the creatures in Magnanthia stay true to the fantasy traditions also found in Middle Earth.

Q:  What can readers expect from the rest of the series?
A:  There’s so much to tell I don’t know where to start! Well…I guess I better summarize so I don’t give anything away. Simon and Jak both have much to learn as they continue down their paths; things are going to get intense. Relationships grow, emotions fly, fighting increases, and battle lines are drawn. And that’s only the beginning! 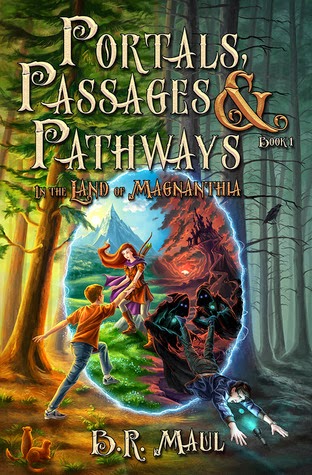 In the Land of Magnanthia
(Portals, Passages & Pathways #1)
by B.R. Maul

When a portal to another world cracks open just outside the small town of Riverside, it sets off a seriesof events forever changing the lives of two boys; one boy is chosen to lead a world to peace while the other one is chosen to tear it apart.

Simon Whittaker lives an ordinary teenage life. That is until the most powerful ring in the land of Magnanthia chooses him to become its guardian. Overnight, Simon has had to flee from something trying to kill him, seen magical spells he had only read about in stories, and stepped into the most majestic world ever imagined.

Swept away to the fantastic world that’s in the midst of a brutal war, Simon must place his life in the hands of four unlikely travelers, a swordsman, ranger, cleric, and wizard, sent to lead him down the right path.

While King Elderten has ordered death to Magnanthia’s nine guardians, the group he believes is responsible for the kingdom’s devastation, Simon remains the only hope for those who believe the guardians are innocent.

Meanwhile, Jak Jakobsin has been pulled through a portal by two of Bedlam’s undead scouts.  Bedlam’s overlord plans to use Jak, along with his army of undead, goblins, and trolls, to build a force so powerful that Magnanthia will be his forever.

“Portals, Passages & Pathways” is a story of our greatest journey, to discover our purpose in this life, and the consequences of the choices we make to get there. “In the Land of Magnanthia” is the first novel in the series and is complete just under 115,000 words. It’s told from the alternating viewpoints of Jak and Simon.

What readers are saying
Amazon.com Reviews

“Very good book. It was quite a fun read, especially for his first book. Can't wait to see what he comes up with next!”

“This book keeps you thinking until the end and even at the end you are left wondering how the next part will play out. You don't know who is deceiving who, who can be trusted, will the company stay together, will the guardian accept his destiny, and what does the journey ahead entail. I will be looking forward to the next book coming out!”

“He has created familiar characters that I ‘recognize’ from my own life. He also uses a rich vocabulary, which gives his book depth.”

“I found the book a very fun read, and found myself staying up a little too late some nights to get in one more chapter before lights out. That to me is the sign of a good book.”

“Maul's imagination and ability to paint a picture of our own childhoods makes it so that anyone reading this book will be able to identify with one of the characters. The story was strong, the content clean, and the writing style easy. I wholeheartedly recommend this series."