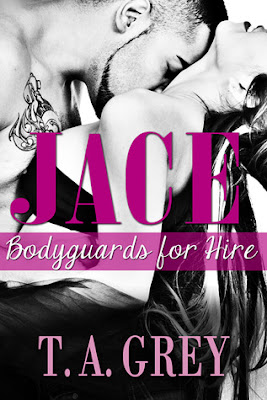 Series: Bodyguards for Hire, Book One

Book Description: One fateful tail-bender leaves Mara Colgen with a hard-on for Jace Mathews which is not how Mara anticipated meeting the hottest man alive. Or, rather, one crappy afternoon bodyguard Jace gets a rude awakening when some cutesy blonde rear-ends his beautiful truck. Now he’s really in for it. Mara’s pretty, funny, and has the greatest job in the world…

She is a sex toy operator.


Add Jace to your Goodreads shelf!


Q & A with T.A. Grey
Q:  Tell us a little bit about your main characters, Mara and Jace.
A:  Mara Colgen is a sex toy operator on the run from a deadly, abusive ex. She is such an interesting character because she’s kind of weird. She’s really shy and has big trust issues with men since leaving her ex, but on the other hand she’s very physical and smart. Spending time with Mara was a lot of fun, and exhaustive sometimes!

Jace Mathews is a hero with a temper problem. Being around Jace is always fun. You just love to hear this unique thoughts on Mara, or just life in general. There is one thing Jace realizes he wants for sure and that is Mara. He also sees her uniqueness and quickly tries to snatch her for himself.

Q:  How long have you been writing, and when did you first consider yourself an author?
A:  I first started writing more seriously around 2007. Before then I wrote a little here and there. 2007 I got freaking serious. It wouldn’t be until 2011 that I publishing anything though.*tries to think back* I believe I considered myself an author the first month I made an valuable income. That was a great feeling. I still remember—pure joy. It was that moment where you realized you could (possibly) do what you love for a living. Now I believe I had only made like $300 that month (non-taxed!). That’s hardly anything to live off of, but I knew then that I could do this. It really was possible. I flew off then and wrote like mad—people were buying my stories so I had an outlet. Greatest times of my life right there.
Q:  What was your favorite scene from Jace to write?
A:  I think in every book there is that chapter or two (or more!) where you just snap your fingers and go “That was so awesome!” Or maybe I’m the only one who does that, haha! Jace has several of these scenes for me. Some that I’ve already re-read many times for fun. My favorite scene is probably the very first chapter when Jace and Mara *bump* into each other. It makes me laugh, blink fast, and blush.
Q:  What is the best advice you have been given?
A:  I think I follow lots of advice or “knowledge” that people pass on. I guess the best one is to “just do it”. I’m not really talking about the Nike slogan, lol. I believe even in the face of one of your fears you have to tell yourself to just do it, to be strong and go through with whatever challenge awaits you. For me it’s been publishing. There are so many possible variables for failure but I don’t let them keep me down. I do whatever it takes, make mistakes on the way, and in the end I succeed. Since I believe in this piece of advice I find it works for me.
Q:  As a child, what did you want to be when you grew up?
A:  An archaeologist, paleontologist, Egyptologist, astronomer, lawyer, ”businessperson”, teacher, and who knows what else.
Q:  If you could be on one reality TV show, what would it be?
A:  Face/Off. I love that show so much. Though I don’t anything about applying professional makeups.
Q:  Hard/paperbacks or eBooks?
A:  eBook then paperback.
Q:  What book are you reading now?
A:  I just got Tiger Magic by Jennifer Ashley and I can’t wait to dive into it. I’m also halfway through Macrieve by Kresley Cole and I’m liking it!
Thank you so much for the interview! I had a really great time.

I love to write the kind of stories that will keep you up late at night and make your heart pound. It's my goal to make each new book better, more exciting, and more action-packed to keep thrilling you. I'm always trying to push the boundaries with my imagination, and yours, to create something new and different.


Mara Colgen slammed on the brakes but it didn’t matter. Her little VW Bug barreled into the beautifully shining black truck.


The air bag exploded, slamming her head backward and making everything all fuzzy.


A high-pitched sound rang in her ears and slowly solidified like someone turning a dial up. That ringing became her horn which was constantly wailing. A glance out of the broken windshield made her breath catch.


A tall, gorgeous, way-too-muscled-to-be-real man was reaching under her hood looking pissed off. Hot and pissed off. Why hello, gorgeous, her feminine side purred. He did something under the hood and her horn stopped blaring. Her eyes flared. He fixed it. She liked this man already. Any man who was handy with cars was handy in the bedroom, or at last that’s what she’d heard. She eyed his hand, totally not creepy, and saw no wedding band on his finger.


His eyes met hers. Yep, he was very pissed off. He looked down right violent. Then he threw open her car door and got in her face. All she saw were pretty eyes. The kind that almost looked blue but were really more gray than blue. He had a black ball cap pulled low over his eyes, a white t-shirt, jeans, and boots. And he was glaring at her.


“Ahem,” she cleared her throat. “I’m very sorry about all this. Your truck was very...nice.” She attempted a smile.


His eyes narrowed in an are-you-shitting-me look. “Lady, what the fuck’s the matter with you? How did you not see me? My truck takes up most of the damn road.” His eyes flicked down to her lap and his jaw actually snapped to the side. She could hear it crack. “Fucking texting. You little bitch, you know that’s against the law for a reason right?”


“Don’t wanna hear it, lady. Get your license and registration. I’m callin’ the cops.”


He left before she could form a reply. Only after he wasn’t in her face could she take a calm breath. “Well that didn’t go well, Mara.” She giggled a little, an involuntary response that she swore couldn’t be helped, and grabbed the necessary items he’d ordered her to get. She met him at his truck as he was getting off the phone.


He went back to the back of his truck, shaking his head. From his profile she noticed he had a hard, sleek jawline covered in rough stubble several days too thick, and hollowed cheek bones. He had a hard looking forehead.


He was mumbling under his breath about women drivers and texting. That’s where she had to stop him. Hot or not, he was wrong about her.


His eyes snapped to her, looked her body up and down then he cocked a brow. “Oh yeah? Well I don’t believe that bullshit for a second.”


“I was actually on the phone,” she corrected.


He threw up his arms, shaking his head. “That’s illegal in this state, lady.”


“Oh, I’ve upgraded from bitch. Very nice.” She couldn’t help smiling at him.


His brow pinched forward. “Now is not the time for jokes. You just wrecked my rear end.”


Speaking of, her gaze fell down to his ass and verified that indeed it looked as hot as the rest of him. Mmm, mmm, good as her friends would say.


“Excuse me, did you just check out my ass?”


She made a perfect oh did I just do that? face. “Maybe.” She cocked her head, gauging his response.


He looked like he might say something, then shook his head. “If you think being cute with me is gonna get you out of this then you’re shit out of luck.” He took out his phone and started snapping pictures of the wreckage. She quickly did the same, since he just reminded her she should be doing that.


Standing next to him trying not to smile, and utterly failing, she snapped pictures for her insurance company. “So you think I’m cute?”


“What the fuck?” Shaking his head, he made some noise between laugh and disbelief. “Hand over your license and registration.”


Snickering at his cop-voice, she handed him the docs. He looked them over, paying special interest to her driver’s license. She knew what he’d find there: 5’5”, brown eyes, blonde, and a weight she refused to even think aloud. Not too shabby if she did say so herself. Which she did often while checking herself out in the mirror after a shower.


“Oh just a sec,” she said, suddenly remembering. She grabbed her business card out of her wallet and handed it to him. “Here’s my business card. Keep it. In case there’s any problems along the way. I’ll be sure to fix your truck. I really am sorry. If it helps, I’ve only been in two accidents before.”


He took the card but didn’t look at her. “Two? Lady, you make that sound like it’s not a lot.”


“You know how many accidents I’ve caused in my life? Zero.”


“Well aren’t you fancy.” Her lips twitched again. Who knew teasing such a big, sexy man would be so much fun.


He sent her a withering glare then looked down at her card. It was a light pink with red, fancy lettering. “Mara Colgen, sex toy operator...” he said the words slowly as if not understanding them.


“Yes.” Honestly, one of her favorite parts about having her job was the reactions she got when people found out.


“You are a sex toy operator,” he said again.


“Mmhmm. Sure am.” Another winning smile. He didn’t even lift his gaze from the card.


“Tell me darlin’ what does that actually mean?”


Oh, now she was darlin’? Oh how her position had moved up in the world. She was bitch only five minutes ago. “Well, as you can see from that card I work at Aphrodite’s Love and we are one of the biggest designers and distributers of adult sex toys. I’m a tester. I also help the production team tweak designs and things like that.”


“You...” he scratched the back of his head, flicked his gaze down her body again, then continued in that slow, measured way. “Your job is to try out sex toys for a living?”