No Rules of Engagemet by Thomas Wilson 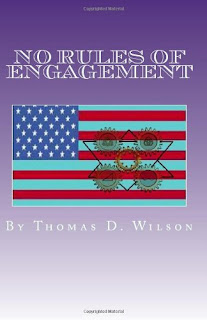 For eight year old orphan, Alexander Hawk, the question, "Is there other Intelligent life in the Universe?" has been answered with a resounding YES! Plucked from a correctional facility for boys because of a test he never even finished, Alexander is sent to train for combat against an alien race of Alligators which is attacking another group of aliens, the Macktonics, who have allied with United States in return for advanced technology. The United States' gathers an army of children so they will arrive at the perfect age for fighting. Alexander faces grueling training exercises as he struggles to rise to the challenge of preparing to save the placid Macktonic alien civilization from pending attack. Before his training is complete he comes face to face with the enemy. Alexander becomes student and teacher as they square off against a superior aggressor. Traveling through time portals crossing time and space to gain intelligence, and ultimately to hunt down their foe before they attack the Macktonics
Posted by Shut Up And Read at 22:05