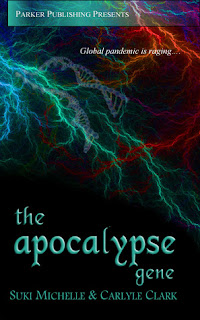 Olivya Wright-Ono's once loving home has been converted to a hospice for the dying. Her ability to see auras forces her to witness, with agonizing detail, the vibrant colors of life consumed by malignancy.

The beautiful and troubled, Mikah, is an elite Empath in the ancient Kindred clan, led by the brooding, ever-morphing, monster named Prime. Mikah has learned a terrible truth . . . the plague is linked to Kindred origins. When Olivya sees evidence of disease creeping into her mother's aura, she has no one to turn to but Mikah. Can he unearth the Kindred secrets and find a cure?

Can she trust this boy whose power allows him to manipulate her very emotions? With her mother's life, and that of the world, in the balance, Olivya and Mikah embark on a quest to stop the Pandemic, only to discover it is far, far more than a mere disease . . .
Posted by Shut Up And Read at 18:30