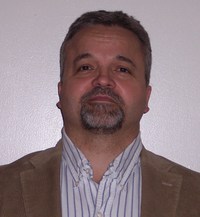 It was my pleasure to interview author Jeff Horton this week! Jeff's newest novel, The Dark Age Survivors of the Pulse, is now available for purchase and will be featured in Read It & Reap soon!

Thank you Jeff for taking time out of your busy schedule to answer our questions!  When and why did you begin writing? What inspired you?
When I was a small child I could frequently be found curled up somewhere reading a great book. I recall reading Tarzan of the Apes by Edgar Rice Burroughs at a very young age, soon followed by the Bible, and classics like Sherlock Holmes, Lord of the Rings, and Call of the Wild.

I took a creative writing class in college many years ago. On a number of occasions we were encouraged to write about anything we wanted. I believe that class was probably the first time I realized how much I enjoyed writing fiction, thus planting the seed for me to begin my career as a novelist about four years ago, in 2008. After years of false starts with various concepts, I had finally arrived at the point that I was ready to attempt a novel. After some contemplation as to what I wanted to write about, I eventually settled on THE DARK AGE, a post-apocalyptic concept about the world after the sudden collapse of civilization worldwide. Although The Dark Age was the first book I wrote, it was actually the second published. My first novel published novel was THE GREAT COLLAPSE, the prequel to The Dark Age.

Were the characters in your book created around people in your life? How did you decide on the character names?
The characters in my novels are usually an amalgam of people and personalities I have either known or been close to. I've been blessed to know a number of colorful people throughout my life, which has definitely helped me as a novelist.

How long does it take you to write a book, from start to finish?
Since I do most of my writing on nights and weekends, it usually takes me a few months to get a first draft completed and another month or so to get through my first pre-submittal edits. I think that Michael Crichton had it right when he said that great novels are not written, they’re re-written!

What was your main source of inspiration for the story?
It came to me one night while I was lying in bed. I imagined a post-apocalyptic world which had regressed to a medieval era level of technology, until an opportunity was presented that can enable civilization to re-emerge and end the dark age.

How do you deal with (or have you had to) rejection letters?
Oh, yes, I certainly have had my fair share of rejection letters. I was thankful when World Castle Publishing, a new small press, picked up not only The Dark Age, but my third novel, The Last Prophet as well.

Certainly the rejection letters I received before my novels were published were not so easy to deal with, especially after pouring so much effort into my books. It was a bit frustrating that so many publishing houses will only go with an author when there is a near-certainty of their success. It seems they are much more cautious these days about the authors they sign, and are much more risk-adverse than they used to be. I dealt with it by just not quitting. Before World Castle came along, I had finally decided that if I was unable to find a suitable publisher for my work, that I would just publish through Amazon.

Are there any authors (living or dead) that you would name as influences?
There were several authors that have really influenced me. Dickens, Doyle, Wells, Clancy, Creighton, Augustine, all have been influential in my writing style.

What does your family think of your writing?

I think everyone (especially me!) would like to see my work jump from being on Amazon's bestseller list to being on the New York Times bestseller list, before appearing on the silver screen! My family really didn’t have any idea how to react in the beginning, since we've never had any authors in the family that we’re aware of. Once everyone saw that it was something I was serious about, however, everyone jumped on the bandwagon and began supporting me 100%.
What book are you reading now?
I just finished reading Moby Dick for the first time. It was a long read and, in my opinion, more about whaling than about Moby Dick himself. I thought that it was an interesting novel, however, a story set in a bygone era.
Can you share a little of your current work with us?
I just finished my first draft of TALES OF EDEN: THE WAY OF NACOR, which is a fantasy/science fiction novel. What I set out to accomplish with Tales of Eden was to develop a book/series that was a mix of Chronicles of Narnia and Pilgrim's Progress, with a little science-fiction thrown in. I'm excited about this novel, and I think it will do very well.
I've also started researching material for my next novel, a techno-thriller set in the near future, during a time when nation states fight wars almost exclusively in cyberspace.
What were your feelings when you first saw the finished product of your first book?
In a word, wow. I never really felt like an author until I was able to hold a copy of my book. It was such a feeling of accomplishment. Now, I've been bitten by the bug and will likely write until I can no longer do so.
Who designs the covers for your books? What is that process like for you as the author?
My publisher, World Castle Publishing, designs the cover, although I am very grateful that they were so open to my suggestions and feedback. They really valued my input and made changes based on what I asked for.

I believe that the right cover for a novel can definitely help make or break it. I always try to ensure that either literally or symbolically, the conveys something important about the novel. 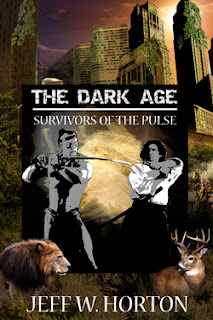 Suppose you learned that an ancient prophecy about an artifact, said to be powerful enough to dramatically change the world, was true. Would you risk everything to find it?

It has been five-hundred years since the Pulse caused the Great Collapse, ending the Golden Age, and civilization on planet Earth. Humanity has waited ever since for a long-anticipated sign from God, which has finally appeared in the night sky. The time has come for Ferrell Young, the Warrior Clan, and the Church to risk everything in an effort to restore civilization, and bring hope to a world full of despair.

Alex Montgomery is an archaeologist who has spent many years looking for a mysterious book on behalf of the Holy Christian Church. The book is said to contain the location of the Great Oracle which, according to legend, can endow the one who finds it with great power and wealth. Of much greater importance to the Clan and the Church however, is the fact that it may also enable the world to emerge from five centuries of darkness and suffering.

When a powerful, intelligent, but sadistic barbarian leader named Kraken learns of the Oracle, he plans to destroy the Warrior Clan and the Church, take the Oracle for himself, and enslave the rest of humanity.

Join Ferrell and his companions as they set out on a desperate journey to find the Great Oracle, and rescue humanity from The Dark Age.

"...I am a fan of good post-apocalypse novels. This book is no exception. The author has shown great skill in weaving a story of "what if." What if everything changed in the blink of an eye? I did find A Dark Age to be a somewhat complicated novel but consisting of basic good versus evil. The author takes the concept and inserts enough detail to quickly define the environment, atmosphere, and characters. This enables the reader to promptly label the players. The main characters are likable, particularly the protagonist Ferrell, Alex and his daughter Hannah, and Brother Sebastian. Then there is the evil antagonist, Kraken, with whom the reader will quickly grow to hate. The plot, while based on a well-used concept, is well thought out and constructed in a manner to keep the reader's attention and interest. I did find the ending to be a touch simplistic but still satisfactory. Overall, it's very well done."
Reviewed by Paul J. for READERS FAVORITE

For More Information:
Find The Dark Age on Goodreads:  http://www.goodreads.com/book/show/11021753-the-dark-age-survivors-of-the-pulse