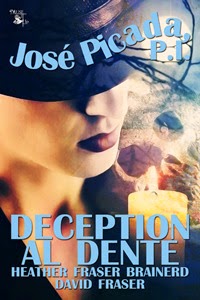 José Picada, P.I.: Deception Al Dente (Book 1)
by Heather Fraser Brainerd and David Fraser
Having left the dull life of workers’ comp insurance behind to strike it out as a private detective, things aren’t going well for Josie P. Cates. Her new career isn't as exciting — or lucrative — as she thought it would be. As her bank account dwindles, her first major client finally walks in the door. Chef Marco, a successful local restaurateur, hires Josie to find out who's skimming money from his business. It doesn't take long for Josie to discover that things at Bistro Italiano aren’t what they seem. Secrets seem to cling to Chef Marco like splattered marinara sauce. With the help of friends both old and new, Josie unravels a case that takes her from the bistro to the world of deadly dark magic. At least it keeps things from being too boring.
ebook, 111 pages
Published February 22nd 2013 by MuseItUp Publishing 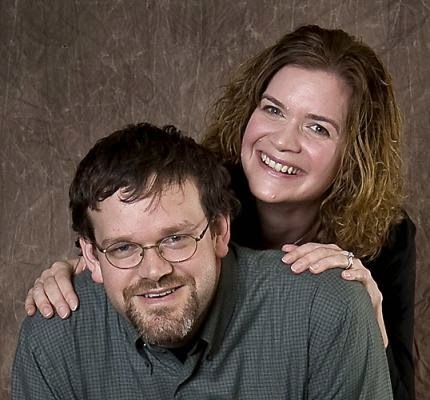 Heather Fraser Brainerd is a renaissance woman. After earning a degree in Anthropology, she embarked on an incongruous career as a workers’ compensation insurance adjuster. She rapidly climbed the claims-handling ladder before surprising her colleagues by leaving the high-powered world of lumbar strains and carpal tunnel syndrome to run a child care center. Thousands of dirty diapers and gallons of strained peas later, she decided that maybe the insurance industry wasn’t quite as bad as she remembered. Unfortunately, it was. Fortunately, a few years later, she met the most wonderful man in the world. Now a stay-home mom to three amazing boys, she is able, at long last, to focus on her writing. Heather lives in New York with her family and their crazy pug/terrier.

David Fraser was born on March 25, 1973. March 25, incidentally, is International Waffle Day (Varfudagn in Sweden) and Tolkien Reading Day (The Ring was destroyed on March 25). Elton John shares his birthday. So next March 25, you should eat a waffle while reading Lord of the Rings and listening to Rocket Man. I know Dave will. Before deciding to become an internationally-famous author, Dave held a number of different jobs. He processed small business insurance policy changes, tested software on digital copier/printers, put out little orange flags in pick-your-own strawberry fields, installed internet cable in schools, shelved books in a library, taught college calculus, and handed out raffle tickets at a Barry Manilow concert. Granted, this last job was a one day temp job, but it was awesome. He currently does little fix-up jobs around his house and chauffeurs his kids while trying to find time to write.