Q & A with Effie Kammenou 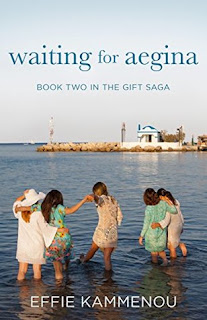 Waiting for Aegina
The Gift Saga #2


Book Two in The Gift Saga: The continuation of Evanthia’s Gift …

In 1961, five little girls moved into a suburban neighborhood and became inseparable, lifelong friends. They called themselves the ‘Honey Hill Girls,’ named after the street on which they lived. As teenagers they shared one another’s ambitions and dreams, secrets and heartaches. Now, more than thirty years later, they remain devoted and loyal, supporting each other through triumphs and sorrows.

Evanthia's Gift follows the life of Sophia Giannakos. In Waiting for Aegina the saga continues from the perspectives of Sophia and her friends as the story drifts back and forth in time, filling in the gaps as the women grow to adulthood.

Naive teenage ideals are later challenged by harsh realities, as each of their lives takes unexpected turns. Now nearing their fiftieth year, Sophia, Demi, Amy, Mindy and Donna stand together through life-altering obstacles while they try to regain the lighthearted optimism of their youth.

Effie Kammenou is a believer that it is never too late to chase your dreams, follow your heart or change your career. She is proof of that. At one time, long ago, she'd thought that, by her age, she would have had an Oscar in her hand after a successful career as an actor. Instead, she worked in the optical field for 40 years and is the proud mother of two accomplished young women.


Her debut novel, Evanthia’s Gift, is a women’s fiction multigenerational love story and family saga, influenced by her Greek heritage, and the many real life accounts that have been passed down. She continues to pick her father’s brain for stories of his family’s life in Lesvos, Greece, and their journey to America. Her interview with him was published in a nationally circulated magazine.

Evanthia’s Gift: Book One in The Gift Saga was a 2016 award finalist in the Readers Favorite Awards in the Women’s Fiction category. Waiting for Aegina: Book Two in The Gift Saga is Kammenou’s latest release.

Effie Kammenou is a first generation Greek-American who lives on Long Island with her husband and two daughters. When she’s not writing, or posting recipes on her food blog, cheffieskitchen.wordpress.com, you can find her cooking for her family and friends.

As an avid cook and baker, a skill she learned from watching her Athenian mother, she incorporated traditional Greek family recipes throughout the books.

She holds a Bachelor’s Degree in Theater Arts from Hofstra University.


Q & A with Effie Kammenou

Tell us a little bit about your main characters.
In the first book of the saga, Evanthia’s Gift, the main character, Sophia, goes from her teens to adulthood. During this span of time, the reader is introduced to her four childhood friends, who she has remained close to.

In Waiting for Aegina, all five of these women make up an ensemble of main characters, with Sophia being in the center of it all.

Each one will have life choices to make and struggles to overcome.

Sophia’s happily ever after is challenged by revelations and events from the past she needs to come to terms with.

Demi battles her mother-in-law for her husband’s attention, and wonders if his affection for her has dimmed.

Amy’s past comes back to haunt her, threatening her marriage and career.

Donna thought she had the perfect life when she married her high school sweetheart. But his drinking, insensitivity and cruelty to a son who doesn’t live up to his standards, sends her family’s life spiraling down a tragic road.

Mindy lost the love of her life when she chose a blossoming and successful career as a dress designer over the demands of her lover. Wondering if she’d made a mistake, she searches for love and thinks she’s found it with a possessive and volatile man.

What was your inspiration behind Waiting for Aegina?
I knew I wanted to make this saga a trilogy. The first book was partly inspired by the death of my mother. Sophia’s life was inspired by the time period in which I grew up, and this is where Sophia’s friends came into the plot. Amy and Mindy were based on my own speculation of the direction a couple of my friends might have taken with their lives. They didn’t, though, and I know this because I’m still friends with both of them. It was my ‘what if they had gone on to do what I thought they would when we were in high school?’ theory. The beginning of the book happens right after the five women leave their thirtieth school reunion. I’d reconnected with a large group of friends at my own and, because of that, I wanted to write a story about lifelong friends and the loyalty they shared with one another.

Who designs the covers for your books and what is that process like for you as an author?
My cover designer is Deborah Bradseth of Tugboat Designs. I commissioned a photographer in Greece to shoot the cover photo. I was very specific about what I wanted—five grown women on a Greek beach together. The photo had to convey the closeness of their relationship and the lightness of the moment. Ioanna Chatzidiakou captured the moment exactly as I had imagined it.

My process is to simply sit down and write. I have a general idea in my head of the story. The details come as I begin to develop the characters and the plot. That’s usually when my research on the finer details begin. I’m more concerned about getting the story out of my head the first go around. After that, I go back several times and rewrite and refine before handing it over to my editor.

Describe your ideal writing spot.
Where I write or the ideal spot to write? It’s a running joke in my home. We have a home office, which I’ve completely monopolized. God forbid my husband tells me he’s working from home!

I keep telling my family I’d like to write the next book on a remote Greek island in a little house by the sea, all alone and undisturbed. Yes, I’d miss them, but when I’m at the computer I don’t come up for air!

What is the best writing advice you have been given?
The best advice was to start writing. Don’t worry about the grammar or sentence structure. After the story is down on paper (or computer) go back and make it sing!

As a child, what did you want to be when you grew up?
I wanted to be an actor. I don’t remember ever saying I wanted to do anything else. I went to college as a theater major. I didn’t have the drive and nerve I needed to pound the payment and take all the rejection. Today, although it’s still hard to break in, the opportunities are greater and with social media it’s easier to make connections.

If you could have any supernatural power, what would you choose and why?
I would want to have the ability to speak every language. I love to travel and I also enjoy speaking with people from different countries and cultures. I would like to be able to converse in each one of their native tongues.

What book are you reading now?
I am very fortunate to have an advanced readers copy of The Hallowed by Jaci Miller. It’s the second book in a paranormal trilogy. I loved the first book and the second is just as compelling.