Q & A with Kit Campbell 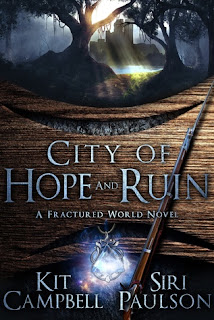 City of Hope and Ruin

Every night the monsters hunt.

A city that is the whole world: Theosophy and her companions in the City militia do their best to protect the civilians from the monsters, but they keep crawling from the Rift and there’s nowhere to run. Theosophy knows she’ll die fighting. It’s the best kind of death she’s seen, and at least she can save lives in the meantime.

They say the Scarred carve you up while you’re still alive.

A village in the shadow of a forest: Refugees from the border whisper about the oncoming Scarred, but Briony can’t convince her brother to relocate his children to safety. Briony will do anything to protect them. She owes them that much, even if it means turning to forbidden magic.

When Theosophy and Briony accidentally make contact across the boundaries of their worlds, they realize that solutions might finally be within reach. A world beyond the City would give Theosophy’s people an escape, and the City’s warriors could help Briony protect her family from the Scarred. Each woman sees in the other a strength she lacks—and maybe something more.

All they need to do is find a way across the dimensions to each other before their enemies close in. 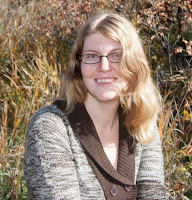 Kit Campbell has never met a mythology she hasn’t liked. This sometimes leads to issues, such as the occasional Norse God of Thunder showing up in the Garden of Eden. She adores weaving in the possibilities forgotten magic can bring to a story, and enjoys making up new creatures, such as large, venomous monsters that hunt in packs.

Kit’s stories have been published in half-a-dozen anthologies, and her YA novella, Hidden Worlds, was released by Turtleduck Press in 2010.

Kit lives in Colorado in a house of ever-increasing chaos.

Q & A with Kit Campbell

Theosophy has dedicated her life to the protection of the City. She fully believes that she’ll give her life to protect it, because that’s the best she can do. Briony is a healer determined to protect her family. She sees it as her duty, since she couldn’t protect them when she was younger. Both women feel somewhat trapped in their respective environments.

2. Who designs the covers for your books and what is that process like for you as an author?
I’ve used a variety of cover artists for different books, but for this book we went with Deranged Doctor Design (http://derangeddoctordesign.com). We’ve been very pleased with the entire process, as well as the end product, and I think we’ll use them again in the future. They were especially helpful because my co-writer and I were having a hard time coming up with what we wanted on the cover, and they managed to take what we gave them about the story and make something awesome.

3. Describe your ideal writing spot.
Quiet. I can and have written a number of places that have worked merely because they were quiet enough that I could hear myself think. Ideally, though, I’d have a comfortable chair, a nice mug of tea, some sunlight, and no distractions. It’s that last one that always gets you.

4. What is the best advice you have been given?
It’s no use worrying over things you can’t change.

5. As a child, what did you want to be when you grew up?
An astronaut. I devoured books on the space program, went to Space Camp three times, and even had half of my application to the Air Force Academy in place so I could be a space shuttle commander. But my vision’s never been so great and I’m very tall, so I would never have been accepted into the astronaut corp, at least by the guidelines of the time. They may have changed. I eventually went into aerospace engineering instead, figuring I could at least send things into space.

In retrospect, however, I was probably always destined to be some sort of storyteller. My parents have certainly never been surprised by the way my career has gone.

6. Which do you prefer: hard/paperbacks or ebooks?
In general, I prefer physical books. I like the smell, the feel, the heft. But I also like ebooks. I like that I can take a ton of them with me when I travel instead of porting three paperbacks along. I like that I can set my ereader on the exercise bike and not have to worry about losing my place. And being able to read ebooks on my phone means that I’m almost never without a story when I have a few minutes to myself.

7. If you could have any supernatural power, what would you choose and why? The ability to know what someone was up to at any point in time. As a parent, that would be so very helpful. My kids would literally never get away with anything. I mean, like most superpowers, there’s a downside to it as well. I imagine there’s a lot of chaos to be wrought with a power like that. Also, what if you couldn’t control it and every time you thought about someone, you also saw what they were doing? Sometimes you probably don’t want to know.

8. What book are you reading now?
I’m reading The Spirit Ring by Lois McMaster Bujold. I’ve got a Twitter specfic book club, and that’s our pick for the month. It’s alt history fantasy. I’m maybe a quarter of the way through thus far, and it’s been pretty good.