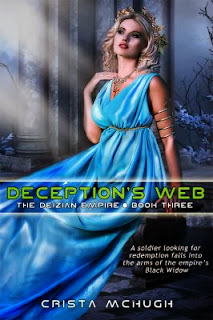 A soldier looking for redemption falls into the arms of the empire’s Black Widow...

Galerius, former Captain of the Legion, is honored to be given a chance to redeem himself by discovering who is behind the failing barrier. A series of anonymous letters all point to Hostilius, governor of Lucrilia, but Galerius thinks he’ll learn more about the plot by seducing the governor’s thrice widowed daughter, Claudia. Although he warns himself not to fall into snare of the empire’s most deadly temptress, one kiss leaves him begging for more.

Claudia has spent years as a pawn in her father’s political games and longs to break free of his rule, even it means betraying him to the emperor. When Galerius arrives in Tivola, she’s not sure if he’s there to aid her father or stop him. She willingly submits to his seduction, despite their class differences, in order to find the truth. What she doesn’t expect to find is a man who indulges her secret fantasies, satisfying her in a way none of her previous husbands did, and treats her as something more than a conquest. As time runs out to thwart her father’s plans, she must decide if she can trust Galerius not only with her life, but her heart.

Excerpt
“Then how are we going to get the throne?”
Her father’s chuckle caused her gut to clench. It was too cool, too collected, too calm. “An emperor is only as safe as his popularity. If the people fear he is placing them in danger, they will demand his head.”
A pause filled the room, followed by Asinius’s laughter. “The barrier.”
“It will take careful planning. Sergius outwitted us once. And the barrier appeared stronger than ever when I was there. This time, I will not act until I am certain I will succeed.”
Claudia bit her bottom lip to keep from gasping. She’d heard rumors that the barrier had been weakened after the death of the prior emperor, but she had no idea her father was behind it. Why would he risk having the empire overrun by the Barbarians? Those creatures knew only death and destruction. They could not be reasoned with, and if the barrier fell, thousands of lives would be lost.
“How shall we start?”
“Slowly. I need to make sure the device is at its maximum potential.”
“That will mean more ore.”
“What do you think I was discussing with Minius last week? The first shipments should start arriving in less than a month. But we must be discreet. If the emperor catches wind of our plan, we’ll suffer the same fate as Pontus.”
“I doubt that, Father. You are far more cunning than him.”
“As you can see, there’s no need to bloody our hands. The masses will do it for us.”
“And when we save them from the Barbarians, they will demand we assume the throne.” Asinius’s laughter drifted outside again, this time with a musical note of insanity in it. “It’s perfect.”
“Would you expect otherwise from me?” The chair creaked again, followed by footsteps. “Remember, patience is the key here. We wait until everything is ready.” Their voices faded as they left the study.
Claudia slid along the wall and rubbed the chill from her arms. How long would her father allow the barrier to fall before he restored it? Hours? Days? Weeks? How many lives would be lost in the process? Whatever his plans included, they didn’t include her. What was to keep him from selling her to Minius in exchange for more ore? Or worse, for him to shift the blame on her should they fail?
I refuse to be his pawn any longer.
She took a deep breath, cleansing her fears from her mind. Her father had made a mistake when he called her useless, and he would pay for it. If he feared the emperor would discover his plan, then perhaps she should capitalize on that.
She stood, straightened her clothes, and went to her room. In careful block letters to disguise her handwriting, she wrote:
If you wish for the barrier to remain intact, you should monitor the ore shipments from Gracchero.
There. Nothing too precise. A hint, and no more. Just enough to clue the emperor in to her father’s plan and hinder his efforts without giving everything away. No one would ever suspect the note came from her. And when her father’s face turned red from frustration, she would have the start of her revenge.
“Zavi,” she called to her slave, “could you please fetch Kafi? I have a task for him that requires his unique talent for discretion.” 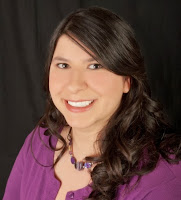 About the Author:
Growing up in small town Alabama, Crista relied on story-telling as a natural way for her to pass the time and keep her two younger sisters entertained.

She currently lives in the Audi-filled suburbs of Seattle with her husband and two children, maintaining her alter ego of mild-mannered physician by day while she continues to pursue writing on nights and weekends.

Just for laughs, here are some of the jobs she’s had in the past to pay the bills: barista, bartender, sommelier, stagehand, actress, morgue attendant, and autopsy assistant.

And she’s also a recovering LARPer. (She blames it on her crazy college days)

For the latest updates, deleted scenes, and answers to any burning questions you have, please check out her webpage www.CristaMcHugh.com