We'd like to welcome to our blog today Nancy Richardson Fischer, author of Pandora's Key, a young adult fantasy novel and the first book in The Key Trilogy! 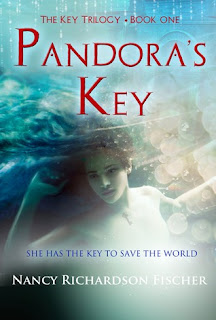 When everything you believed about yourself is a lie, how do you unlock the truth…


Evangeline Theopolis has nightmares about the violent deaths of women she has never met. Her single mother, Olivia, suffers delusions she can’t hide. And Malledy, a brilliant young man, may have a disease that will leave him paralyzed and insane. Their lives are about to collide.
On Evangeline’s 16th birthday her mother gives her a necklace with an antique key charm—a family heirloom, though no one knows what the key unlocks.

Everything changes. Her mom is hospitalized. Her godmother attempts murder. An ancient Order tries to kill Evangeline, and a lethal sect to kidnap her.

Nothing makes sense—especially Evangeline’s own face, which has morphed from geeky to eerily stunning; the ancient key that feels strangely alive against her skin; and the magical abilities she begins to possess. Evangeline must use her wits and supernatural powers to fight her deadly adversaries and discover her true identity. But can she accept who she really is and save the world?

"With this fresh, intriguing novel, Fischer is clearly laying the groundwork for a trilogy that will successfully continue to bring ancient mythology forward into a modern tale of self discovery... Fischer's fast pacing and numerous plot twists are sure to keep the reader turning the pages... Characters are well fleshed-out and sympathetic, and some have hidden alliances that serve to make Evangeline's plight seem all the more realistic. With vivid imagery, compelling characters and plenty of bursts of action, this first novel weaving mythology and contemporary teenage troubles is thrillingly memorable!"
—Kirkus Indie

"In this inventive debut installment of The Key Trilogy, an Oregon girl's life is uprooted by the discovery of her pivotal role in a prophecy stemming from Greek mythology... Surprising twists add to the story's intrigue. The co-author of several sports autobiographies, Fischer hits her stride in this quick-paced novel."
—Publishers Weekly

Get your own copy of Pandora's Key now!
Amazon ~ Barnes & Noble ~ Smashwords

May 2012
Pandora's Key starts out as two different stories. Evangeline's story and Malledy's story. Both are equally captivating and fun to read. Evangeline's life completely changes on her 16th birthday. After going from somewhat awkward teen to someone she hardly recognizes in a mirror, what was supposed to be a special day turns into a nightmare. Nothing makes sense anymore to Evangeline and she has no on to turn to for help…no one she can trust anyway. Malledy is a superintelligent man with a disease that is slowly killing him. He is looking for something that will cure him, and he is willing to go to any lengths to get his hands on that something.

When the two stories finally merge, it was like nothing I would have expected. People weren't who they seemed to be, both for Evangeline and for Malledy. Evangeline gets to the point where she just does not know who she can trust anymore, so she ends up trusting no one, while Malledy did not really seem to trust anyone from the beginning, with good reason.

The characters were great. Evangeline is your normal awkward teen and easy to like as a main character. Her character was well balanced in that she was not so beautiful and popular that you wanted to hate her, yet she was not so down on herself that you got tired of her wining. I think that's a hard balance to create when writing about teen girls, but the author managed it here. Malledy I think we did not get to know quite as well, but we did get to see his motivations and his way of thinking. I loved the mythology background to this story. I loved that the author was able to take such a well known piece of mystery and create a unique story to go with it. It was fresh and entertaining, and I guarantee you'll be left guessing about what's coming next until the very end.


Thank you for stopping by our blog today Nancy!  When did you first know you wanted to be a writer?
I can’t recall wanting to be anything but a writer. Maybe that’s because I have a limited skill set, or because writing is a job that you can do in your PJs or anytime during the day. Most of all, though, I have always told stories in my head, and it got kind of cluttered in there. So I thought writing my stories down would be a good idea. Plus, stories had a HUGE influence on me as a kid. They ignited my imagination and I hope I can do the same for other people because a life without imagination would be sad.

Imagination is a must for writers!  How do you come up with character names? Are your characters based on people in your life?
For Pandora’s Key, Book One – The Key Trilogy, I had a great time coming up with the characters’ names.

I chose Evangeline’s name after the actress Evangeline Lily from Lost. She was a super complex character who many times felt incapable but always drew from an inner strength she never knew existed and kicked butt in the end. I felt like my Evangeline was a lot like that character so the name fit. Sounds exciting!  Can you share a little of your current work with us?
I just finished writing Book Two of The Key Trilogy – The Key to Tartarus. I absolutely cannot wait to publish it later this summer because I think it’s even better than Pandora’s Key. I’m super proud of Evangeline and her journey in Book Two. She’s thrown a serious amount of curve balls and has tremendous difficulties, and it has been incredible to watch her grow. Plus, I had the chance to take her relationship with Raphe to the next level (always fun) and to see just how powerful, magical and brave she can be.

Now for the hard questions...What book are you reading now?
I just finished Fifty Shades of Gray. I haven’t written my review yet because I’m not sure how I feel about the story.

Do you have any hidden talents?
Hidden talents… I can juggle☺ I love to kitesurf. And I make an insanely delicious carrot cake! If you could be any supernatural creature, what would it be and why?
This is a hard one. I’d love to be able to fly, be invisible when I chose, and be off-the-charts smart. Is there one supernatural creature that can do all that? If not, I might have to create her in Book Three of The Key Trilogy! 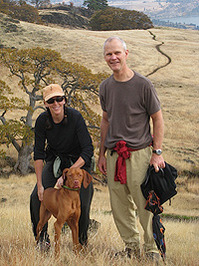 I was born on the east coast and went to Cornell University. After college I worked as a writer for Ringling Bros. Barnum & Bailey Circus. It was a fun first job and I learned how to write quickly, and also that when elephants sneeze on you it's very (VERY) messy. After a year in the circus, I moved out west. I lived in Aspen, Colorado where I skied as much as possible and worked as a waitress in a Mexican restaurant. Great experience but I learned that waitressing is hard (HARD) and I'm not very good at it.

After Aspen, I moved to San Francisco, California where I worked as a writer for University of California, San Francisco and wrote freelance for LucasFilm. At UCSF I learned that sitting in a cubicle under fluorescent lights dulls my soul. LucasFilm taught me that writing freelance, especially fiction, is fun (FUN). So I headed to graduate school in Boulder, Colorado to further hone my skills.

For the first part of my freelance writing career I wrote sport autobiographies. I'd visit and travel with an athlete like Monica Seles, Bela Karolyi, Nadia Comaneci or Apolo Ohno and then write their book. It was a terrific job, but after ten years and tons of incredible experiences I got tired of writing other peoples' stories and not my own.

I've always loved books with adventure, magic, and dark forces. I'm a huge fan of Stephen King, Peter Straub, Neil Gaiman, Suzanne Collins and George R.R. Martin. Those writers allow a reader to lose themselves in stories that are intense, sometimes other-worldly, yet strangely believable. I feel incredibly lucky that now I have the chance to create books for readers that will hopefully captivate and transport them into a world where the supernatural is possible with characters that they can relate to who are flawed yet totally compelling.

Today I live in the Pacific Northwest with my amazing husband, Henry, and our mostly loveable (but sometimes vorpal) Vizsla, Boone. When I'm not conjuring a story, I love to kite-board, bike, ski or plan adventures with Boone and Henry, who both make me laugh for different reasons and who are the best partners in fun a gal could ever imagine.

Email address:
thekeytrilogy@gmail.com (I love hearing from readers and will always write back!)

Goodreads:
http://www.goodreads.com/author/show/98412.Nancy_Richardson_Fischer
Posted by Shut Up And Read at 22:21