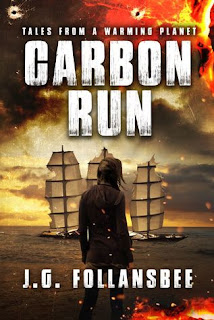 Carbon Run
Tales From A Warming Planet #2
by J.G. Follansbee

What if your father had to run for his life? Carbon Run is an exciting thriller set in a dystopian world ravaged by climate change. Fossil fuels are banned, pirates smuggle oil, and governments erase citizens' identities. Anne Penn dreamed of saving an endangered species of birds. When a fire destroys the birds' last home, her beloved father Bill is accused of starting the blaze. Fanatic officer Janine Kilel comes to arrest Anne's father, but Bill escapes, because in the 22nd century, destroying a species means execution. How will Anne find her father in a Russian city where the difference between good and evil is as murky as the choking smog?

J.G. Follansbee is the author of science fiction and speculative fiction novels set on an Earth and in a society transformed by climate change. A writer who publishes independently, Follansbee explores themes of survival, justice, and tolerance with strong female protagonists and antagonists. Mr. Follansbee supports meaningful clean energy and transportation policies that combat the damaging effects of climate change.

Tell us a little bit about your main characters.

Anne Penn is an intelligent, hard-working young woman who lives with her father on a ranch in southern Oregon. She's a sharp observer who has spent several years helping biologists study an endangered species of birds. Her father, Bill Penn, is an ex-tall ship sailor who is forced to return to the sea after he is accused of causing the deaths of the birds his daughter studies. He sails aboard a ship that crosses the top of the world after all the Arctic Ocean's ice melts away. Janine Kilel is a deputy inspector in the Bureau of Environmental Security who is tasked with finding and arresting Bill Penn for his crimes. Kilel uses Anne Penn as bait to draw Bill out of hiding.

In your opinion, what makes a good, strong lead character?
A strong lead character drives the narrative forward. She is not a passive bystander. I like strong female characters, because they provide a unique perspective on the action, and they often have different goals than male protagonists. For example, I wanted Anne Penn to have an unbreakable tie to her father, which drives her to work toward reuniting with him to preserve her family. A male character might be more interested in proving himself to peers to show his masculinity. Readers have seen plenty of that over the centuries.

What or who do you see as influences on your writing style?
I admire many writers, including Margaret Atwood, Rod Serling, and Harlan Ellison. The biggest influence on my style comes from episodic television and movies. I try to write well-structured scenes and often think of chapters as similar to episodes of a well-crafted TV series. My favorite show ever, by the way, is Star Trek: The Original Series.

Do you ever research real events, legends, or myths to get ideas?
For Carbon Run and the upcoming books in my series, Tales From A Warming Planet, I read several books on climate change, and I constantly read articles on the subject. I've tried to base the world of Carbon Run on accepted, proven science. For the tall ship scenes, I drew on my experience working for a non-profit that operates two ships, as well as my maritime history research that resulted in three non-fiction books.

What is the best writing advice you have been given?
Write every day, even if it's just a note, an email, or a tweet. Most readers and new writers see only the final product: a book. Of course, writing a novel is a process done one step at a time. If you write just one page a day, in a year, you'll have 365 pages. That's about the right length for a book manuscript.

If you could have any superpower, what would you choose and why?
I wish I had a power that could make adversaries see that they have more in common than they have differences. Maybe then, we'd all get along better.

What do you do to unwind and relax?
My wife and I own a small vacation house on the Pacific Coast of Washington State. We wish we could spend more time there. Also, I love watching my home town NFL team, the Seattle Seahawks. Go Hawks!

What book are you reading now?
I'm reading The Three-Body Problem, by Cixin Liu. It's a great story that calls to mind classic science fiction of the mid-20th century. I think science fiction fans should keep a close eye on Chinese sci-fi writers. They're going to amaze us.