Q & A with Damien Black 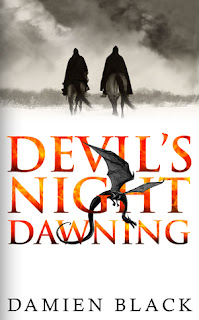 For centuries, the monastic Order of St Argo has stood between the mortal vale and the dark forces of the Other Side. Now a mystery warlock seeks an ancient power to rule realms, and only two of its witch hunters can stop him – if they can stay alive long enough to identify him…

When young novice Adelko is assigned to legendary adept Horskram, he rejoices at the chance to l For centuries, the monastic Order of St Argo has stood between the mortal vale and the dark forces of the Other Side. Now a mystery warlock seeks an ancient power to rule realms, and only two of its witch hunters can stop him – if they can stay alive long enough to identify him…

When young novice Adelko is assigned to legendary adept Horskram, he rejoices at the chance to lead an adventurous life. An adventurous death isn’t what he had in mind – but it comes calling when they learn of a sorcerous theft, one that could bring ruin on the Known World. They suspect a demonologist at work, but don’t know anything for sure.

Whoever it is knows who they are and wants to silence them – permanently. As they flee from one danger to another, their homeland erupts into civil war – the rebellious southern barons have reunited and want to dethrone the King of Northalde. The world they know teeters on the brink of a momentous struggle that will reshape it forever…

High fantasy meets gothic horror in this gripping tale of suspense, conflict, faith and magic – the first part in an epic saga of sweeping proportions. 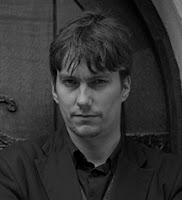 For as long as he can remember, Damien Black has been blessed and cursed with a hallucinogenic imagination. His sleep is disturbed by strange dreams that he struggles to remember upon waking, glimpses of worlds where superstitions are reality and prayers might actually work.

The only cure he knows for this malady is writing, an auto-exorcism he performs on himself daily. Over the years, these scribblings have evolved into horror-strewn tales that plot a winding course through the tropes of fantasy fiction.

Tell us a little bit about your main characters.
Horskram and Adelko are monks who belong to a religious order that specialises in fighting evil spirits and hunting down warlocks. Rather than go for the usual wizard/warrior hero set-up I thought I’d do the opposite: have protagonists who are essentially pacifists but opposed to wizards of all kinds. Adelko is a promising novice assigned to Horskram, a legendary adept with decades of experience. He is unassuming and humble, but his keen mind and thirst for adventure get him into trouble. Horskram is a former crusader who has renounced violence; he has a dark past that gradually becomes revealed as the story progresses. He is hardy, wise and intelligent, but certainly not flawless! He makes mistakes.

Who designs the covers for your books and what is that process like for you as an author?
Red Raven designed the cover for my book and I love what they came up with! They gave me five mock-ups to choose from, so I put it to a panel of friends to see which ones worked best. We narrowed it down to two and I went for the more understated one as I felt it best reflected the slow pace of the story, which gradually builds over time to an action-packed climax.

Describe your ideal writing spot.
Ooh, tricky! Well I write at home, but anywhere comfortable and warm with the minimum of distractions and noise will do. I believe that writing is fundamentally about what comes from within, location is about finding the best place for you to channel that.

What is the best advice you have been given?
The self-published fantasy author MJ Sullivan advised me to keep writing and not worry too much about sales and publicity in the early stages. He says three books is the magic number, when people really start to take your series seriously and invest in it. That rings true, as I’ve heard both JK Rowling and George RR Martin didn’t really take off until they released the third books in their respective series.

As a child, what did you want to be when you grew up?
A writer. Honest!

Which do you prefer: hard/paperbacks or ebooks?
I love paperbacks. Always have done – the cover art, the feel, everything about them appeals, even when they get a bit dog-eared.

If you could have any supernatural power, what would you choose and why?
I think I’d have extended longevity like Aragorn in The Lord of the Rings. The problem with life is there is simply never  enough time. At forty I feel I’m only just getting to know myself. We can waste a lot of years through trial and error, making mistakes. Learning from those is of course part of life’s journey - I just wish we had more time to gain the benefit of those lessons.

What book are you reading now?
Assassin’s Apprentice by Robin Hobb. I like it because it’s a slow burner set in a quasi-medieval world with some very dark elements, but nothing too graphic or obscene. There is quite a lot of violence in my own work, but it’s also nice to read writers who don’t use it so much.