Q & A with Bobby Treat 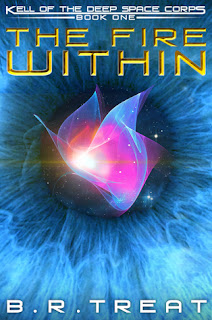 The Fire Within
Kell of the Deep Space Corps, Book #1
by Bobby Treat

At the end of the 21st Century, the United Nations includes Texas, The States, Luna, Mars and Ceres. The Deep Space Corps of Engineers went to the stars and returned with friends — the walking celery Spruigh and the levitating knotted-snake Bokka. Nanotech medicine pushes life expectancy past a hundred years. Babel provides worldwide communications and virtual reality via brain modem. Life is long, and it’s better than ever.

But the Corps is hiding the existence of alien enemies. Skirrl dragon-lords circle like vultures, and it falls to Kell Stark to catch them at it. Attending the DSC Academy (AKA the Rock) has been her dream since she was three, but her application to the Rock and her meta-human abilities put her in the crosshairs of the telepathic Skirrl. The Commandant of the Corps leaves her to fend for herself, and the warrior Spider hired to guard her has PTSD and a shadowy past.

Nothing in Kell’s life has been simple — certainly not her cousin Jimmy’s trial for sexually assaulting her at sixteen. She’s angry, isolated, volatile, and not always herself. Sex is a handy distraction, but it’s not enough.

The challenges she faces are daunting — but she has a fire in her belly. She will not yield. This is the story of a young woman fighting to save her life, the human race, and hardest of all — her soul.

Warning: This story includes violence and sexual scenes, both straight and lesbian, and is not intended for children or young teens.

About the Author:
B. R. Treat hails from Snyder, Texas, which everyone agrees is "smack dab in the middle of nowhere", but a great place to grow up. It was an oil boom town in those days, but today it's a wind-farm boom town. Ah, progress!

He retired from the US Air Force and along the way earned a B.S. in Math at Texas Tech in Lubbock; an M.S. in Operations Research at AFIT in Dayton, Ohio; and a Ph.D. in Management Science & Information Systems at U.T. Austin. He was Volunteer of the Year at the Austin Rape Crisis Center in 1988.

His wife, Elizabeth Slaughter, is his best reader and sounding board by far.

Q & A with Bobby Treat

Q:  Kell us a little bit about your main characters.
23-yr-old Kell Stark believes she was made more than human in the womb. She’s angry, volatile, and not always herself. Sex is an easy distraction, but it’s not enough. Her cousin Gretel hires Cardiff, a former soldier and long-term war-crimes suspect, to protect Kell from an unexplained threat Kell doesn’t believe in. The Deep Space Corps Commandant, Captain Stevenson, is hiding alien threats, but Kell Stark discovers them the hard way.

Q:  Who designs the covers for your books and what is that process like for you as an author?
Terry Rodgers at https://www.behance.net/observaterry designed both my covers. I had gathered stock images and tried to design a cover myself, but was STUCK for weeks. Terry came up with a workable concept in two days. I’d been trying to come up with covers that depicted my main characters photographically, but I was advised to pick something more symbolic. That’s what eventually worked, and I love the result. Terry used some of my images and made them work.

Q:  Describe your ideal writing spot.
I spend a lot of time writing at a local fried chicken place, but I get more output lying flat on my back in bed, with my Macbook Air on my stomach — between midnight and four in the morning! I’m a night-owl.

Q:  What is the best advice you have been given?
“Teeth, without gums, fall loosely in the mouth.” J. M. May
Just kidding. No, I’m not. I don’t listen to writing advice, if that’s what you mean.

Q:  As a child, what did you want to be when you grew up?
Spiderman — or even better, a telepathic warrior from the Lensman Series (Doc Smith).

Q:  Which do you prefer: hard/paperbacks or ebooks?
I loved paper books for fifty years, but now an eBook is easier on the eyes and cheaper. We have close to 2,000 paper books around the house, but that’s enough! It’s more practical to put the next 2,000 on my e-reader.

Q:  If you could have any supernatural power, what would you choose and why?
I don’t write telepathy and teleportation as “supernatural” powers precisely, but those would be my choice.

Q:  What book are you reading now?
I just finished “The Healing Power of Sugar” by C.L. Stone. The series is a guilty pleasure, oddly going nowhere but addictive!