Q & A with Angela B. Chrysler 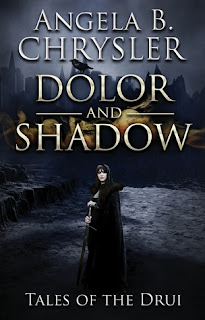 Dolor and Shadow (Tales of the Drui)
by Angela B. Chrysler

As the elven city burns, Princess Kallan is taken to Alfheim while a great power begins to awaken within her. Desperate to keep the child hidden, her abilities are suppressed and her memory erased. But the gods have powers as well, and it is only a matter of time before they find the child again.

When Kallan, the elven witch, Queen of Lorlenalin, fails to save her dying father, she inherits her father's war and vows revenge on the one man she believes is responsible: Rune, King of Gunir. But nothing is as it seems, and the gods are relentless. A twist of fate puts Kallan into the protection of the man she has sworn to kill, and Rune into possession of power he does not understand. From Alfheim, to Jotunheim, and then lost in the world of Men, these two must form an alliance to make their way home, and try to solve the lies of the past and of the Shadow that hunts them all.

Find it on Goodreads

Buy it on Amazon

Angela B. Chrysler is a writer, logician, philosopher, and die-hard nerd who studies theology, historical linguistics, music composition, and medieval European history in New York with a dry sense of humor and an unusual sense of sarcasm. She lives in a garden with her family and cats.

More on me here http://www.angelabchrysler.com/about-2

I love adverbs, prepositions, and splitting my infinitives. I also write "can not" and never "cannot" because it's just wrong smashing a verb and an adverb together to make a verby adverb.

Q & A with Angela B. Chrysler

Kallan is an elfin witch and queen of the Dokkalfar. Despite being very passionate about her people and duties, she is spunky, strong-headed and defiant. A slight bit of immaturity is still present due to her youth (for an elf that is. She’s only 700 years old after all).

Rune is Kallan’s nemesis and king of the opposing kingdom at war with Kallan’s city. He is far more mature, having inherited his father’s kingdom years prior to Kallan, he has forced to mature far sooner making him more patient and forgiving than Kallan. Bound by a vow to protect Kallan when Rune and Kallan are thrown into a live or die scenario, Rune does all he can to help Kallan who is out to kill him.

Bergen is Rune’s “little” brother, being born a whole 2 minutes after Rune. To Kallan, he is the heartless Dark One who is consumed by a Darkness that seeks to destroy the world and all that is good. To Rune, Bergen is his laid back, carefree brother who is tightlipped when it comes to a good chunk of his past. To the ladies, Bergen is about as suave, arrogant, and sexy as they come. And he knows it. And to this author, he is a pompous over bearing Nord Lord who won’t stay out of my Guinness. He has a most genuine soft side buried beneath a rugged, scarred exterior.

Q:  Who designs the covers for your books and what is that process like for you as an author?
My cover artist is a company called Indigo Forest Designs. Phenomenal artist! I tell the artist what mood, genre, and demographic I’m going for, a little about what I see and then give the artist carte blanc to reach their artistic visions.
The first draft is what is published. I adore the cover process and my artist pegs my vision every time!

Q:  Describe your ideal writing spot.
My desk, closed away from the world. It’s always messy because I rarely take time out to clean my desk.

Q:  What is the best advice you have been given?
The “Advice” I received was really an inspiration that came from Tom Clancy on the writing of Hunt for the Red October. Clancy did SUCH a good job at the research that the government showed up and said, “You can’t publish our secrets.” Clancy explained that everything in Red October was information available online if people bothered to do the research. He had to show the government exactly where he found all his research.

The lesson learned? To be so thorough, that you fool the experts.

Q:  As a child, what did you want to be when you grew up?
A composer for the movies like James Horner. I studied until I was 20 years old. I provide more of these details and why I stopped in Broken. I also wanted to be an actress.

Q:  Which do you prefer: hard/paperbacks or ebooks?
When I’m serious about the read and really want to enjoy it, I go paperback. When I browse the selection and have to read through for a review, eBook. I would have to say, paperback when I read as a reader/fan. Ebook when I read as an author or business.

Q:  If you could have any supernatural power, what would you choose and why?
To never have to poop, exercise, eat, or sleep. So much time wasted on those things.

Q:  What book are you reading now?
I am reading my own fantasy, Dolor and Shadow, to prep for finishing its sequel. I also will be starting Crown of Stones by C.L. Schneider and Along Came a Wolf by Adam Dreece. I will be reading all three of these books online as part of “Story Time” on my site.