I'd like to welcome Juliann Whicker to the Shut Up & Read blog today!

Check out Juliann's latest release, book 2 in the House of Slide series, Hybrid - 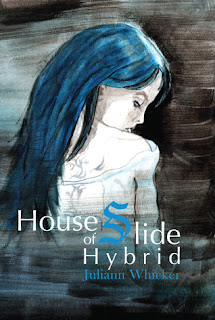 A new soul in a dangerous world.

Dariana Sanders, daughter of the prestigious House of Slide, has her hands full. The Bloodworker who killed her brother is dead, but it turns out that he's not the only one who wants Dari, or who will do anything to make sure that she's taken care of before she learns to control her powers and becomes a force to be reckoned with. She needs her friends, family, and a reluctant soulmate if she's going to survive.

Add Hybrid to your Goodreads shelf!


My Review:
Hybrid by Juliann Whicker
My rating: 4 of 5 stars

Book 2 in the House of Slide series is, in short, amazing. We come into the story shortly after Dariana has gotten her soul back and becomes "normal" (if there can be a normal in this story) again. She has to learn to live a completely different life than she had been, and I love the character development we get to witness as she deals with everything thrown her way. The continuation of the world we first entered into in Hotblood (book 1) is completely unique from anything you've read before…and the complexity! I am amazed how the author is able to strand everything together to make it into a coherent, engaging story. Delving into the world of the Hotbloods, Cools, Wilds, and Hybrids is an amazing journey. The author's incredible imagination feeds the story and grows it into this fascinating creation.

In Hybrid we are reintroduced to our favorite characters from Hotblood, Dariana and Lewis (oh Lewis, how I love him!), plus we get more of Satan and Grim! Yay and double Yay!

Haven't read Hotblood yet? Go get to it now!! Then come back for this one… 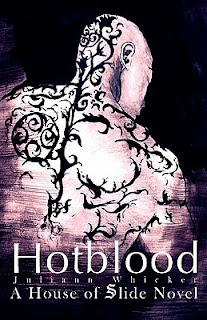 He stole a kiss from the wrong girl…
Left without a soul, 17-year-old Dariana Sanders waited to die. There was nothing left to live for, nothing to feel besides the aching cold that never stopped. Her parent’s marriage was in shambles, and her brother, the only one who understood, the only one who knew how to make the cold go away, was gone forever. The only thing Dariana knew with absolute certainty was that nothing could possibly be right again. Enter Lewis Axel Nialls. Luckily for her, impossible is right up his alley. He can save her from the forces that wish to destroy her. Of course who’s going to save him, from her?

Add Hotblood to your Goodreads shelf!


My Review:
Hotblood by Juliann Whicker
My rating: 4 of 5 stars

Hotblood is the story of seventeen-year-old Dariana. Dariana's brother, Devlin, had stolen her soul from her 10 years earlier. She had no idea of what had happened, of course, and thought he was the greatest brother for being so caring towards her, although the truth was he was barely keeping her alive. Dariana had gone through much of her life an empty shell. The story opens up on Devlin's funeral, and with him now gone, Dariana's existence was also going to be coming to an end.

Lewis, a Hotblood, watches Devlin's funeral from afar, for reasons unknown to him, and is inexplicably drawn to Dariana. He continues to watch her after the funeral, and they have an unexpected run-in in the woods. Neither of them knew this moment would change their lives forever.

The beginning of the story was filled with so much information and not enough explanation, although things eventually become clearer later on in the story. At first I was not sure what to think about this, but the more I thought about it, I realized we were seeing the world the way Dariana would see it. She had been living as a soulless shell of a person, almost unaware of her surroundings, and all of the sudden things were clear. She was confused, scared, and trying to make sense of things.

The characters in this book were fabulous! They were all very well developed. Dariana's life before was void of any emotion, and now it was fun to watch and get to know her as she was experiencing everything new. I really liked Lewis. He was such a complex character, and there was more to him than we initially thought. I loved Grim and Satan! Maybe we will get to see them more in a later book?

The author did a great job building the complex world in Hotblood. It was unique from anything I have ever read, which is very refreshing, and it was very entertaining.


Q & A with Juliann Whicker:

Q: Welcome to our blog Juliann! When did you first know you wanted to write?
A: I am so excited to be on shut up and read! Thanks for having me. I didn't start out wanting to be a writer, I just wrote. I typed up my first 'book' when I was eight years old on this junky type writer that was missing a lot of letters, so I had to put in other symbols to replace them. I've been grateful for the letter C ever since.

Q: Can you tell us a little bit about your main characters, Dariana and Lewis.
A: Dariana and Lewis are soul mates. That means that they complement each other, not that they're the same, at all. So there's conflict but always that perfect oneness when they're together, which happens now and then.

Q: Do you have a favorite character? Which character did you have the most fun writing?
A: Satan is probably the most fun to write, because he never gives me a hard time. I know who and what he is, what he smells like, and what he'd say, or the look he'd give you while he wasn't saying it. My favorite character is Lewis. He's so complicated, never quite possible to pin down, but at the same time, utterly consistent about Dariana. He's so careful with her, trying to be the perfect guy for her, but knowing that he's got these gaps in who he is that will never bring her happiness in the long run. He tries anyway.

Q: The setting for the House of Slide series is incredibly complex. Where did you get the idea behind the books?
A: Like the setting, how it got there is kind of complicated. I'll start with the Nether. I went to the show at the Excalibur in Vegas, and they had these knights racing around indoors on horses. I sat on the front row, eating a whole chicken when a black horse with a cloaked rider passed by me close enough that I could hear the horse's heart beating (not really, artistic license:) A clod of dirt flung from the hooves of the monstrous beast struck me in the forehead, scattering grit over my meal. It was a true eureka moment, and I knew as I smudged dirt across my forehead that I had to write that character or he wouldn't let me go. So, I'm still writing.

The world came to me as I sat on the edge of the tub with a notebook trying to figure out where this creature came from, whether he was an angel, devil, alien, or what. I'm still not sure what the Nether are, actually, maybe a little bit of all of them, but their purpose here, their reason is mostly to create a race that can save humanity from the demons that came from their same realm, demons that feed on souls and chaos.

My superhero abilities come from personality theory, something that's always fascinated me. You've got these melancholy, sanguine, choleric and Phlegmatic types, which have been around forever practically, and they used to think that they were in the blood, so that's sort of where my 4 blood types are from.

I also drew an illustration a few years before I began writing House of Slide, with the Nether, Dariana, Lewis, and the Uncles with smoking guns staring at me when I was done, so they've been in my subconscious for who knows how long.

Q: What was your favorite scene to write from Hybrid, House of Slide?
A: There were tons of fun scenes in this book, not fun to write exactly, because I wanted them to be perfect, but really fun to read when I finally got them right. I love the monster scene. I laugh every time I read it. I love the Intending scene although it was a nightmare to write the perspective of soul sight without it being completely confusing. Hopefully it's not. My favorite, the one I rewrote a dozen times was the garage scene. It's steamy;)

Q: Two of my favorite characters from Hotblood were Satan and Grim. Are we going to be seeing more of Dariana's uncles in Hybrid?
A: We will see Grim and Satan in their roles of Sons of the House. Dariana's relationship with Grim is definitely developed further. There's more backstory about the uncles in the tweener book, Wilds coming out hopefully next spring.

Q: Where are you planning on taking the House of Slide series? Are you planning more books for the future?
A: So far House of Slide is going to cover 4 books and one tweener. So, that's 4.5 books? Hopefully I can keep it to four, but certain things have to happen to carry the plot, and sometimes other events pop up that I'm not expecting. My characters give me attitude.

Q: Who designs the covers for your books, and what is that process like for you as the author?
A: I'm an artist, I went to school for it, so my blunders are all intentional. (right) I use ink to paint the covers, scan them in, my husband does formatting, and that's the process. It's a long process with lots of drafts but I like the power of having my vision of the book become reality. There's always the fear that I'm lacking perspective because I'm so close to the subject, but I don't ever get to complain about the catastrophe my cover is, so that's okay.

Q: What do you do to keep busy when you're not writing?
A: I'm a homeschooling mother of 4. I sew, garden, (I have dirt under my fingernails as I type from getting my last bulbs in) and paint.

Q: What are you reading now?
A: Last night I stayed up 'til 1:30 finishing Pride and Popularity, by Jenni James. I always love a good retelling. I have a bad habit of finishing the books I start however long they take me, so I'm not usually 'in process' for very long.

Thanks for having me on your great blog. I love my story and am grateful for the chance to share it with others.