Q & A with Gary Ballard 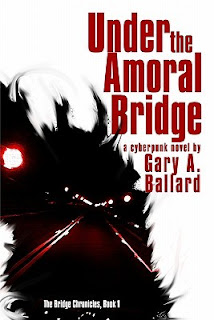 Under the Amoral Bridge
The Bridge Chronicles #1
by Gary Ballard

This taut futuristic thriller is the debut novel by Gary A. Ballard, originally published serially on the World Wide Web at http://amoralbridge.blogspot.com.

Find it on Goodreads
Buy it on Amazon  Barnes & Noble 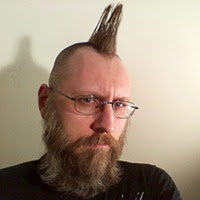 I began writing things down at the age of eleven, and I haven't stopped since. I have written far too many things that have gone unpublished, from very terrible horror novels in my teens, to comics during my time at Belhaven College until finally settling on cyberpunk science fiction after graduation. I have released three novels in a cyberpunk series called The Bridge Chronicles. The Bridge Chronicles in turn is one slice of cohesive universe that began as a pen-and-paper roleplaying game.

I currently live with my beautiful wife and three very insane dogs in Mississippi, where I continue to write my novels.

Q & A with Gary Ballard

Tell us a little bit about your main characters.
In my cyberpunk series, The Bridge Chronicles, the main protagonist is Artemis Bridge. He's a fixer in near-future Los Angeles whose nickname in the seedy underworld is The Amoral Bridge. If you need something illegal, immoral or unethical, he "knows a guy" that can get it for you. For a fee, he'll connect you with that guy. He does not touch the goods, he does not know from the goods, and he promises complete anonymity with no judgement. Of course, in the process of the series, he gets involved in a whole lot more than he would like, but that's where the fun starts for the reader.

In my Cthulhu Mythos series, The Stepping Stone Cycle, Dr. Jack Carter is a forensic psychologist who works with the FBI. The series begins with Jack waking from a fugue state in an asylum, having lost the last two years of memories. Since he was the last person to see his wife alive, he comes under suspicion for her abduction and possible murder, but he insists on his innocence. Through the process of investigating their disappearance, he discovers a conspiracy of murders tenuously connected to his case, all of which point to the creeping growth of something supernatural just out of the edges of perception.

Who designs the covers for your books and what is that process like for you as an author?
I'm a graphic artist as well as a writer, so I design my own covers. The process is a welcome creative exercise, allowing me to do visual work as well as writing.

Describe your ideal writing spot.
I really only have one writing spot, which is my computer room/office. I tend not to work well with laptop keyboards, so sitting at a desk is really my best option. Turn on Spotify, crank an album of whatever I'm in to at the time and burn through some pages.

What is the best advice you have been given?
Think of yourself as a writer first, regardless of whether you make money writing or not. You have to get your mind set on the concept of being a writer and stick to it or else it's just a hobby.

As a child, what did you want to be when you grew up?
A Planet of the Apeman! Actually that's true - I loved Planet of the Apes as a kid. As far as profession, I really did want to be a writer since I was about 11 years old and first started writing stories down on paper.

Which do you prefer: hard/paperbacks or ebooks?
I can read either one, and both have their strengths, but just based on convenience as well as storage, I have to say eBooks. Not killing trees to satisfy my reading desires helps as well.

If you could have any supernatural power, what would you choose and why?
I want to know everything. If it were physically possible, I'd want to read every book ever, even the crappy ones. Information and knowledge are my ultimate highs.

What book are you reading now?
I've been mostly trying to catch up on Marvel Comics last year's worth of comics but between that I'm slowly making my way through Arthur C. Clarke's 2001. My classic sci-fi knowledge is woefully inadequate and the movie version is one of my top 10 movies ever. So I owed it to myself to read the book, and it's sequels.