Q & A with Mark Benjamin 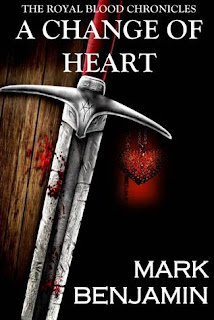 A Change Of Heart
by Mark Benjamin

Bullied his entire life, orphaned university graduate, Gabriel Harper, is bitten by a Royal vampire moments before sunrise, transforming him over the course of six terrible and exhilarating nights into a hybrid—human by day, vampire by night.

Just as he learns to come to grips with what he has become, the Silver Legion—a covert, vampire-hunting organisation—kidnap him and his three friends, forcing them to join their clandestine crusade; however, they remain unaware of Gabriel’s nature until it is too late.

Each choice made sets in motion a turn of devastating events—from love-triangles and fratricide, lust and betrayal, broken dreams and the thirst for power, vengeance and the spilling of blood defines victory.

A Change Of Heart is set primarily in the fictional City of Penance; interweaving the lives of Legionnaires, humans and vampires in the course of a year.

Q & A with Mark Benjamin

Here, I'll talk about three characters: one for the humans, the Silver Legion as well as the vampires.

Gabriel is the main protagonist in The Royal Blood Chronicles series. An orphan, his home life is terrible owing to his alcoholic and abusive uncle, with his aunt being the only good thing at home. Gabriel is also a loner, having few friends, but the vampire bite changed his life for the better and worse concurrently. Along the way, he's recruited by the Silver Legion, vampire hunters, and he has to come to grips with battling vampires whom he now considers part of his race.

Within the Silver Legion, I choose Arthur as one of their main characters. A Captain within the Dark Knights, the night warrior arm of the Silver Legion, his rise up the ranks is unprecedented in their history. With an ego and ambition larger than his Elder Superior forebearer, his hatred for vampires and their sympathisers knows no bounds.

Among the vampires, I choose Adara as their main character. Beautiful yet deadly, she is the only female Royal Vampire left in the world. She also falls for Gabriel, though the fact that he's in the Silver Legion provokes a barrier she knows she will not cross.

2. Who designs the covers for your books and what is that process like for you as an author?
I have the book cover in mind whilst writing, and once the book is done, this could change completely or have a few changes here and there. I discuss the cover with my wife, Lucy, and together, we choose the layout and have it done.

3. Describe your ideal writing spot.
In a room. Alone. I don't care whether I'm at my desk or lying in bed, but I have to be alone with no distractions. Perhaps the fact that I talk out loud or sometimes jump up and pace around needs solitude, or I'd be locked up in an asylum!

4. What is the best advice you have been given?
Never, ever, give up!

5. As a child, what did you want to be when you grew up?
I wanted to be a soldier in the special forces. I grew up watching Rambo, Van Damme and Arnie, so my choices were skewed towards that direction.

6. Which do you prefer: hard/paperbacks or ebooks?
That's a difficult one. I prefer reading paperbacks because of the actual holding of a physical book, but I also like ebooks as you get to carry them wherever and I can read them in bed whilst Lucy is asleep without turning on the lights.

7. If you could have any supernatural power, what would you choose and why?
I would choose Oscar Wilde's Dorian Gray's powers of immortality. To never age and never get physically hurt would be the best. Again, I think childhood job of being a soldier comes into play here!

8. What book are you reading now?
I'm currently reading a fantasy book and a comedy book.