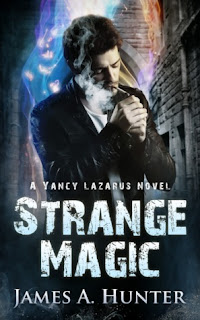 Yancy Lazarus is having a bad day: there’s a bullet lodged in his butt cheek, his face looks like the site of a demolition derby, and he’s been saran-wrapped to a banquet table. He never should have answered the phone. Stupid bleeding heart—helping others in his circles is a good way to get dead.

Just ask the gang members ripped to pieces by some kind of demonic nightmare in LA. As a favor to a friend, Yancy agrees to take a little looksee into the massacre and boom, he’s stuck in a turf war between two rival gangs, which both think he’s pinch-hitting for the other side. Oh, and there’s also a secretive dark mage with some mean ol’ magical chops and a small army of hyena-faced, body-snatching baddies. It might be time to seriously reconsider some of his life choices.

Yancy is a bluesman, a rambler, a gambler, but not much more. Sure, he can do a little magic—maybe even more than just a little magic—but he knows enough to keep his head down and stay clear of freaky-deaky hoodoo like this business in LA. Somehow though, he’s been set up to take a real bad fall—the kind of very permanent fall that leaves a guy with a toe tag. Unless, of course, he can find out who is responsible for the gangland murders, make peace in the midst of the gang feud, and take out said dark mage before he hexes Yancy into an early retirement. Easy right? Stupid. Bleeding. Heart.

Find it on Goodreads
Available at Amazon

Hey all, my name is James Hunter and I’m a writer, among other things. So just a little about me: I’m a former Marine Corps Sergeant, combat veteran, and pirate hunter (seriously). I’m also a member of The Royal Order of the Shellback—‘cause that’s a real thing. And, a space-ship captain, can’t forget that.

Okay … the last one is only in my imagination.

Currently, I work as a missionary and international aid worker with my wife and young daughter in Bangkok, Thailand. When I’m not working, writing, or spending time with family, I occasionally eat and sleep. Strange Magic is the first novel in the Yancy Lazarus series—the third, full-length novel, Wendigo Rising, just released on November 3rd, 2015.www.JamesAHunter.Wordpress.com
www.twitter.com/@jamesahunter13
www.facebook.com/WriterJamesAHunter

Q & A with James Hunter

Hey all, my name is James Hunter and I’m a former Marine Corps Sergeant, combat veteran, and pirate hunter (seriously). I’m also an Urban Fantasy writer—not that you’ll catch me making that confession in public. I’m the author of the Yancy Lazarus series, which revolves around the adventures and various shenanigans of Yancy Lazarus, a magical, wet-works man turned rambling blues hound. I’d like to thank Sheri and the folks from the Shut Up & Read Group on Goodreads for having me on their blog.

1. Describe your ideal writing spot.
My home is the worst place to write: far too many distractions. Ideally, any place that has coffee will work and if it doesn’t have internet, all the better. The internet—with its Youtube and Facebook—is a vicious time thief, constantly seeking to bog me down with its endless entertainment and distraction. *Shakes fist at internet*

2. Who designed the covers for your book and what was that process like for you as the author?
Although I love the covers for all my books, Strange Magic is hands down my favorite—it has an iconic look that perfectly sums up the series. All of my covers were designed by the great folks over at EBookLaunch.com (Dane, specifically), though with quite a lot of input on my part. I picked out all the photos (cover model, magical effects, background), explained the general layout and vision for each cover, then left the execution in the hands of people far more capable than me.

3. What is the best advice you have been given?
As a writer, you need to give your first draft permission to suck. Like really suck. My first book (which was a terrible high/epic fantasy novel) took four years to write because I had to try to make everything perfect before I moved on. These days, I sit down, get the first draft out as quickly as possible—knowing there are going to be issues—and then address the suckiness during the editing phase. That advice has really revolutionized writing for me and has made it far more enjoyable.

4. How do you keep busy when you're not writing?
Right now, I’m a stay at home father with a toddler, and boy let me tell you toddlers are a crazy-pants amount of work. My little girl is a beautiful, awesome, destructive ball of chaos, dedicated to undoing anything I attempt to do. When I’m not doing housework, cooking, watching my baby girl, or writing, I really enjoy reading and sleep—generally in that order.

5. If you could have any superhuman ability, what would you choose and why?
I’d take the “freeze-time” ability. I mean invisibility or the ability to fly would be crazy-cool, but I sure could use a couple more hours in the day. A few extra hours to get stuff done while my toddler is frozen, and thus unable to destroy all my efforts to bring order and sanity to my home. Plus, more time to write.

6. Which do you prefer: hard/paperbacks or ebooks?
I’ve got to admit I have a soft spot for paperbacks—there’s just something cathartic in holding a book in your hands. The way it feels under your fingers, the way the pages smell. I love books. With that said, most of my reading is now done on my Kindle. True, I love physical books, but I also love how inexpensive ebooks are, not to mention the ability to carry around an entire library in my pocket is totally amazing.