JOLT - The Paranormal and Dystopian by K.D. McLean 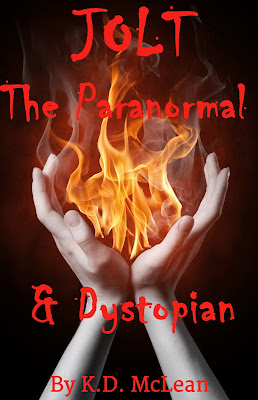 JOLT The Paranormal and Dystopian
by K.D. McLean

What if it cost you NOTHING to put gas in your car? What if you paid nothing to heat your home or cool it in summer? What if your electric bill was only for new light bulbs? How would that change your life? A real pipe dream, right?

Joel Heath, PhD has dedicated his career to making this pipe dream a reality. He’s obsessed with unlocking the secret of cold fusion energy. He’s come so close, but the final piece of the puzzle eludes him.

Which is a good thing, for Joel actually. You see, Phil Devlin’s energy conglomerate earns billions in profits with things just the way they are. He’s been keeping tabs on Joel. Phil was ruthless in attaining his stature of wealth and influence, and he’d protect his position with ferocity. He can crush Professor Joel Heath with a text message.

Neither man knows the planet is 90 days away from global slaughter, triggered by an oil war. One man does know. He has been cursed with prescient visions. These visions have shattered his life, plummeting him from an established career to begging on the street.

Joel’s simple gesture of compassion to this homeless derelict is rewarded with a dazzling insight. He has the key! This jolt of clarity begins with a touch, a touch that can send the world spinning out of control.


He kept his head down. Like blinders on a horse his stringy hair kept the faces of the people ignoring him from his peripheral vision. He had been out on the street begging all day and now deep into the night. With each step his feet ached from the cold. He placed them as softly as he could, every pace agony.


He was muttering to himself, arguing with the unseen tormentors of schizophrenics everywhere.


The rank stench of too many clothes and too few baths surrounded him, an unseen barrier between him and the shoppers and diners rushing home.


He paused for a moment. “Okay! Okay!” he muttered as he approached the entrance to Odessa’s. He brushed the hair from the side of his face and peered in the window. Brown teeth peeked out from behind his salt and pepper beard when he grimaced. He sidled backwards until his back rested on a telephone pole. He wasn’t even forty years old and was worn out.


Joel came out of the restaurant entrance. He looked to his right. Cathy’s home and store were only four blocks away. He knew he should feel guilty for what he said to her, but he was only telling her the truth. She had always been jealous of his accomplishments when they were kids. She never recognized the work and drudgery of studying every night. She had been too busy with her nose buried in some novel or glued to the television. He had worked damn hard. She had everything handed to her on a silver platter.


He turned to his left. His own home was only four blocks away.


“Gotta quarter, gotta dollar, it’s cold out.” The wretched panhandler was at the edge of the sidewalk, leaning against a telephone pole shaking the coffee cup at him.


Joel took another quick step towards a shower and bed and stopped. He turned. Oh man, that guy smelled. His hand went into his pocket and fingered the change. He peered at the guy. They were probably close in age. What kind of dreams did this guy have when he was 16? And Christmas is coming, right? Cathy had made it all too clear he was a heartless bastard—emotional misfit? He pulled all the change out of his pocket. Up yours Cathy. He bent over to drop the coins into the cup.


“You are the light.” The beggar’s black eyes opened wide, stabbing him with their intensity.


“What…” Joel’s hand splayed open from the force shooting up his arm. His feet were rooted to the sidewalk. An avalanche of fire invaded every cell in his body—fire without pain. Time slowed. He could hear the crackling of snowflakes crushed by the falling coins.  Microscopic particles of snow glared, iridescent and coursed through his optic nerves. He squeezed his eyes shut. It was too much. He pulled his arm but the beggar wouldn’t let go. He was so strong!


He shut his eyes from the intensity. He saw a brilliance he had never experienced before. Colors cascaded through the spectrum before him. Violet to blue, to green, then yellow. Each one subsuming the other. Then orange, then red.


His entire consciousness was flooded in white. Not a glaring white, a peaceful and total whiteness overwhelmed him.  Oh God, it was beautiful. All was one! One was all! Through his clenched eyes a single tear trickled down his face. Oh!


And then gone. He was released. The suddenness almost caused him to fall backward. Stumbling for a second, he regained his footing and watched as the beggar fell to his knees, scrambling with bare fingers to claim the coins.


“Mine! Get away. Go see her! You’ll know why. Well, fuck yourself.” The beggar shot him a quick look before resuming his search.


What the hell? Every hair on his body was standing at attention, tingling. He leaned over to touch the beggar’s shoulder, to help him to his feet. What the hell just happened? “See who? Cathy?”


The beggar’s arm swept upward, knocking Joel’s hand away. “LEAVE ME ALONE!” The homeless man stood up, scowled at him and lurched up the street.


He took a step back. Easy Joel, this guy might have a knife. What just happened? He couldn’t chase that guy if he even wanted to. His feet were one with the Earth. What the hell did that mean? It meant something joyful. He closed his eyes again and turned his face to where he knew the stars were watching. He arched his back, his arms stretching out. The single tear joined by others. He opened his arms to embrace the stars and galaxies. They were one with him and he with them. He held the universe in his heart and cried silently. He opened his hands and felt the stardust in the snowflakes as they landed and melted.


It was all clear now. And it was so simple. How could he have missed it? Yes!


He straightened up. He looked at the few passersby who eyed him curiously.


“It’s okay, just had a moment here,” he said. He smiled at them. One nodded back. They all left.


He turned and started walking. Then walked briskly. The hell with it, he started to jog. He didn’t feel his feet slide on the patches of snow. Move it. He began to run back to the lab. Ribsey would have to eat the dry kibble he set out every morning. Sorry buddy. 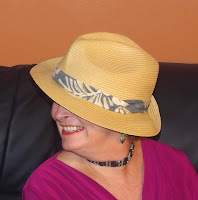 Katie lives in Canada near Lake Ontario with her partner Desmond. They are living the life that they’ve always dreamed about--writing, editing and collaborating on books. Both are alumni of Queen’s University in Kingston and are frequent visitors to the Tyendinaga reservation, where the novel JOLT is set. She has published a series of adult romance books as well as a romantic comedy, recently released – Funny Business.

For relaxation (what is that?) she and Desmond enjoy walking their neurotic pug, trying different recipes together (Des cooks, Katie helps) and watching HBO movies, followed by immersion in their hot tub. There’s almost nothing better than star gazing in the frigid air while being toasty warm…Well maybe skiing at Mont St. Anne is a close second.

In taking on an epic of the scale of JOLT, Katie has been inspired by the words of Goethe.

“Be bold and mighty forces will come to your aid.” 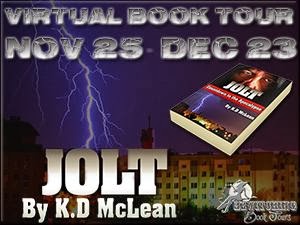